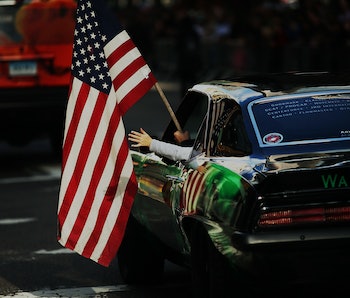 By the time he died, my grandfather had been taken apart by World War II. A wound that laid him up near the end of the war — and, famously within my family, that put him in traction long enough for someone to snap a photo that became a war bonds ad — never closed, leaving him with an open wound on his hip for 60 years. He walked with difficulty as long as I knew him. Diabetes found him and, during his 70s, strangled the circulation to his feet. One leg had to go, below the knee. Then the next.

Men like Art Meehan are why we celebrate a separate holiday for veterans. V Day and V-J Day are to commemorate the end of war; Memorial Day is for the dead. Veterans Day is for the men and women who filled the interstitial. Returning home, going to school, raising families, and carrying the wounds perhaps for decades.

People tend to thank veterans on these holidays, which is a kindness. It also gets somewhat tiresome — the phrase “thank you for your service” wears thin eventually. It’s fine instead to call a vet today, shoot the shit, say you’re thinking of ‘em, and let ‘em know you’re available to do your part if they need anything. Freedom ain’t free and all that but it’s pretty damn cheap to share it.