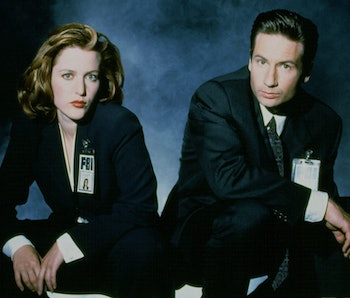 Twitter users in Southern California began tweeting “#UFO bro!?” and uploading videos of mysterious lights shooting through the sky on the evening of November 7, 2015.

Inverse talked to one witness, Savannah in Murrieta, California, about what she saw when the bright light hit the horizon.

Savannah and her sister were driving home from church around 6 p.m. PST when her sister suddenly pointed out what looked like a shooting star careening through the sky. Neither sister heard any noises from the direction of the light.

“We saw everything from the beginning ‘til the end,” Savannah says. They took out a phone and started recording the strange incident right away, which Savannah uploaded to Twitter a little while later.

“It was orange and yellow with a bright star-like shape,” Savannah says. “Then it slowly started to disappear and started to turn into a white dot that just kept getting bigger and had a long white tail on it.”

But then things got even weirder.

“The strangest thing happened… it looked like it exploded in the air and the whole sky illuminated into a huge white circle. The back of the large white circle was green and then slowly started to fade.”

So what’s the deal? While this looks like something that might’ve happened on the second season of Fargo, it might actually be the work of… the military?

According to ABC 7, military training is causing flights out of Los Angeles International Airport to be diverted, thanks to nighttime “maneuvers” happening over the Pacific. The adjusted flight paths are only temporary, reports the Los Angeles Times, and will go back to normal on Thursday. Until then, residents east of LAX may experience added noise… or bright lights in the sky.

The military has been mum about the exact details of the operations they’re testing out, and NASA hasn’t chimed in yet about whether this was actually some sort of space debris instead… so with only the vague information we’ve been given, we’ll have to assume these lights are just mysterious military business as usual until next week. Or a meteor. Or an awesome publicity stunt for the newest season of The X-Files.

Here are a few more insane posts about whatever-the-heck-it-was.

Update: The OC Sheriff has spoken… sort of.

But, basically, our hearts will be Scully and Mulder-ing the hell out of this forever.

More like this
Innovation
Jan. 23, 2023
These 5 futuristic tech ideas could help us explore distant worlds
By Jennifer Walter
Science
1 hour ago
Astronomers May Be on the Cusp of a “Potentially Revolutionary” Cosmological Breakthrough
By Universe Today and Matt Williams
Science
Feb. 2, 2023
Exclusive: NASA Explains How the Voyager Missions Could Live Until 2035
By Kiona Smith
LEARN SOMETHING NEW EVERY DAY.
Related Tags
Share: