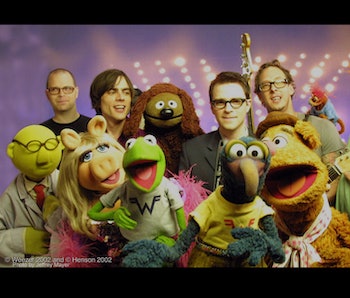 This week, Weezer dropped two new tracks that really show how far the band has come — specifically how far they’ve traveled from where most of us want them to exist.

Rivers and team played the Guitar Hero Live release party and the host filled time between songs with a bit of Q&A, which was a reminder of how goddamned insane-yet-inane the Weezer lead singer can be. He revealed that sometimes when he’s bored and lonely in his giant mansion, he goes to Twitter to invite fans to swing by the house and read Shakespeare with him — to which the audience erupted in applause because nothing Rivers Cuomo does is sad. Then the interviewer discussed the twentieth anniversary of the Pinkerton album, which Rivers summed up as both “a whoops mistake” and then “a collection of songs that have something special about them I guess.”

God, I wish that sitcom based on Rivers’ life hadn’t been killed in pilot season. I wish I could’ve seen an actor be this non-committal to a genius music career.

Immediately after the discussion of “Pinkerton”, the band unveiled their new song. Check this out:

Okay, so what the hell was that?

How did Rivers go from defining a generation’s ability to pining mournfully for girls from a distance to doing whatever this is? It would be borderline sexist if it made any sense at all, I suppose. It’s both stalkerish and somewhat Christian at the same time, and worst of all feels like a “Green Album” track. Also, why make a lyric video for a song where you should be trying to bury the lyrics behind the wall of guitars and the vaguely “Lose Yourself” influenced verses?

Maybe this seems like such a criminal move because I’ve always championed Weezer as the greatest band in “PreCog Pop” — where you know the words to their songs, even if you’ve never heard the song before. The first time you heard “Beverly Hills” on the radio, you probably sang along to the entire track, and didn’t notice. But who could possibly do that with this weird treatise on cannoli.

It really highlights just how far Weezer has come since Pinkerton and how painful those twenty years have really been.

Then it turns out Weezer dropped a second single this week, and it really swings for the fences in the opposite direction.

Now where the hell as Cuomo been hiding that?

This sounds like one of those precious Pinkerton era B-side tracks that most dudes from my generation cherish more than any radio track Weezer has ever released. It’s covered in fuzz, the bass works against the harmony instead of following it, and the lyrics are ludicrous but not in a stomach churning way.

In a statement to Pitchfork about the song release, Cuomo reveals that this is about pill abuse he used to do with a girlfriend, but now he keeps Google Docs to track of consumption and withdrawal of all addictive substances from caffeine on up.

As a palate cleanser, here’s a younger band covering a song you like more than either of these new tracks.