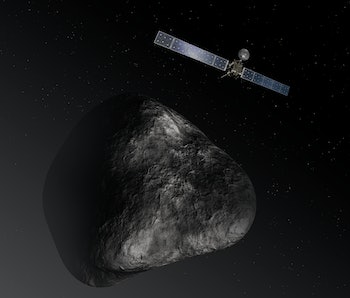 The European Space Agency confirmed that the Rosetta space probe will end its study of comet 67P/Churyumov-Gerasimenko next September by crashing into the comet’s surface. This isn’t just for thrills: The goal is to give the orbiter’s sensors and instruments a chance to gather as much data as possible as it nears the big ball of ice and rock. Recovering them just isn’t a priority.

Rosetta, conceived in 1993 and launched in 2004, finally caught up to comet 67P last year, and dropped its Philae lander module onto the comet’s surface just a few months later in November. Philae has been MIA since this past July, but Rosetta itself has been working as well as expected.

Rosetta has been sending tons of data to ESA scientists back here on Earth. As the most extensive study of a comet ever conducted, the mission has helped us learn a ton about the geological composition and behavior of these strange, dusty objects — from the presence of sinkholes with ‘dinosaur eggs’, to how they respond upon close encounter with the sun. Most recently, Rosetta discovered that comet 67P contained significant amounts of gaseous oxygen.

But the party has to end at some point; the funding dries up next year. Even if it didn’t, Rosetta is solar powered and, as the comet starts its return away from the sun, the orbiter wouldn’t get enough sunlight to power itself.

Quite a few options were on the table. The spacecraft could have been switched into a hibernation mode and resurrected when the comet made its return approach to the sun in four to five years’ time. However, there were fears the cold temperatures of deep space would damage the craft. Other resources like fuel might have run out sooner than anticipated as well.

Sending Rosetta to its destruction makes more sense because it gives the ESA an opportunity to collect what might turn out to be a wealth of useful data.

There’s still a lot of work planned for the mission before next September arrives. Now that the comet has eased off from the sun, ESA scientists are planning to move the orbiter closer to 67P and continue snapping more images. Plenty of time for all of us to start drafting up eulogies for the little dude.

More like this
Science
4 hours ago
Look: An Iceberg Twice the Size of NYC Just Broke Off Antarctica
By Jennifer Walter
Science
Jan. 26, 2023
An asteroid will come within 2,200 miles of Earth tonight — here’s why you shouldn’t worry
By Jennifer Walter
Science
Jan. 31, 2023
NASA Finds the Culprit Behind a Webb Telescope Malfunction: Powerful Cosmic Rays
By Doris Elín Urrutia
LEARN SOMETHING NEW EVERY DAY.
Related Tags
Share: