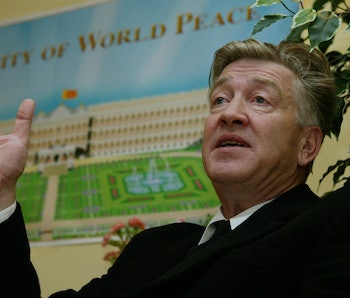 On Thursday, November 5, a bevy of celebrities will gather at New York’s Carnegie Hall for Change Begins Within, a benefit concert for the David Lynch Foundation. Proceeds from the event, which includes performances from Katy Perry, Sting, Jerry Seinfeld, and more, will go toward providing free Transcendental Meditation (TM) instruction to “10,000 at-risk New Yorkers, including underserved youth, veterans with post-traumatic stress, and women and children who are victims of domestic violence.”

TM is a specific form of meditation, pioneered by Maharishi Mahesh Yogi in India in the mid-1950s. In his own words, “The goal of the Transcendental Meditation technique is the state of enlightenment. This means we experience that inner calmness, that quiet state of least excitation, even when we are dynamically busy.”

Lynch is currently the biggest living proponent of TM. His foundation is dedicated to the education and spread of TM and its teachings across the world. In 2012, the Foundation even made a documentary, Meditation, Creativity, Peace, about TM and Lynch’s promotional travels across the world.

A TM session takes about 20 minutes and is done two times a day. Proponents claim that their meditation reduces stress. The American Heart Association backed up those claims, to a certain degree, with a 2012 study that found African-American TM practicers were 48 percent less likely to have a heart attack or stroke or die than those who attended health education classes for over five years.

TM, as the documentary reveals, is very hard to explain or replicate without actually undergoing it; it also costs about $1,000 to receive a lesson from an official instructor. Each meditator has a personal “mantra,” which she never reveals to anybody. Once someone has her mantra, she repeats it internally to enter a state of meditation. As Yogi says, it’s a determined break from the hectic nature of everyday life. It’s not so simple, however, that you can just decide on a mantra, mutter it a few times, and you’re meditating! It’s a process that must be learned and is meant to calm the meditator.

Given the price barrier for entry and the inability to learn it solo, it’s very, very easy to be skeptical of TM’s effectiveness and benefits. The Beatles and their “Dear Prudence” muse Prudence Farrow Bruns may have been into it, but celebrities have been known to get into some wacky fads; this one, for what it’s worth, has been around in modern culture for over half a century. So while it may not be clear if TM “works” or if it’s “worth it,” it is certainly the case that those who do TM enjoy it and seemingly benefit from it.

More like this
Science
Jan. 28, 2023
ChatGPT could help students cheat — but it could also revolutionize education
By The Conversation and Sam Illingworth
Mind and Body
9 hours ago
Why Is My Skin Worse in Winter? 5 Conditions Dermatologists Watch out For
By The Conversation, Jeffrey Chen and Sonal Choudhary
Mind and Body
Jan. 30, 2023
Swapping Cigarettes for Vaping May Help You Quit — but There’s a Catch
By Elana Spivack
LEARN SOMETHING NEW EVERY DAY.
Related Tags
Share: