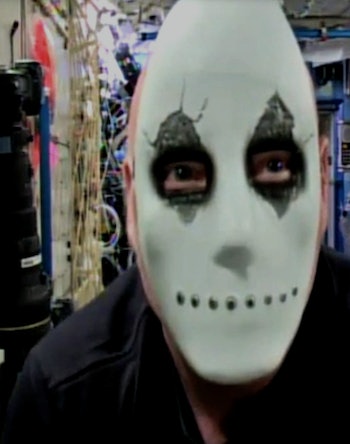 The minute-long video shows Kelly drifting at a glacial-but-somehow-menacing pace towards the camera, arms folded serenely, with a super scary white mask on. Seriously, who thought googly eyes could look so creepy?

After some ominous music fades out, a dispatcher chimes in: “Uh, you guys appear to have a stowaway.” Understatement, much?

While Kelly’s mask isn’t as iconic as say, Halloween’s Michael Myers or Scream’s Ghostface, we definitely wouldn’t want to run into anyone wearing this mask in zero gravity (or on Earth, for that matter). And the video certainly brings to mind Alien’s terrifying tagline: “In space, no one can hear you scream.”

Kudos to Kelly for being the coolest record-breaking astronaut around.