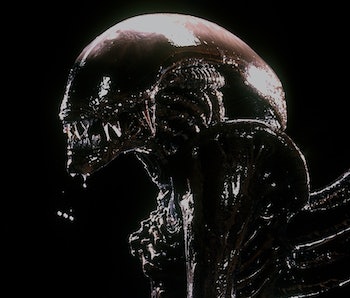 This news isn’t unexpected. Not long after 20th Century Fox gave Blomkamp the thumbs up, the director admitted that he was forced to tweaked the concept so as to avoid overlap with Scott’s Prometheus follow-up. Rumors perpetuated this matter earlier this summer — Blomkamp’s Alien was entering a holding pattern to allow for Prometheus 2 to pave the way. Scott more recently announced that Prometheus 2 is moving forward under the name Alien: Paradise Lost, a complete 180 to his earlier comments insisting the Prometheus franchise only shared loose connective tissue to the Alien saga proper. It’s said to begin shooting in March, packed with xenomorphs.

It’s a strong possibility that Blomkamp’s vision for his untitled Alien sequel simply hemmed too closely to Scott’s. Remember, when Fox gave the go-ahead, Scott hadn’t decided to shoot Prometheus 2. He was attached to produce Blomkamp’s film, and in doing so, perhaps the creative juices began to flow when surrounded by all that developmental xeno-heavy art. If that’s the case, the fact that his biggest financial and critical hit in years has earned Fox $394 million to date probably put the issue to rest. Who gets to make their Alien movie? The guy who just made us bank! (And of course, he’s a gifted visual storyteller who made the franchise what it is today.)

Initially, Blomkamp intended to craft a sequel set directly after the events of Alien and Aliens — whether it was to completely ignore Alien 3 and Resurrection is still uncertain — while Scott’s Prometheus spinoff trilogy would have taken place hundreds of years earlier. It was only when Scott said he envisioned several Prometheus sequels, with the last one containing a direct connection to Ripley, that Blomkamp’s project looked doubtful. Although he does say it’s “kinda holding/pending” depending on how Scott’s film turns out.

There’s a number of possibilities here that don’t all end in me sobbing at the thought of never seeing Sigourney Weaver hold a pulse rifle again. Might it be that the two directors’ plans converged to a point where the idea of making one streamlined franchise was the better option? It was getting confusing trying to figure out how the two story strands would co-exist — even Scott was unsure of where Blomkamp’s film fit into the chronology. What if Scott is moving forward with Elizabeth Shaw and Michael Fassbender’s severed head, following them to the Engineers’ home world, so Blomkamp can kick in later with a post-Aliens film that somehow ties into Scott’s new prequel mythology? If Shaw and David learn a particular aspect about the aliens that was previously unknown in the franchise, that could factor into Blomkamp’s sequel.

For all those disappointed to hear that Ripley and Hicks’ future adventure has been backburner-ed in favor or Shaw and David, don’t despair. They’ll always have the concept art.