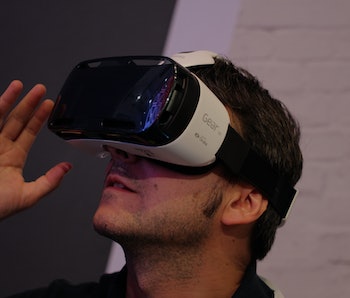 You and four other friends can virtually come together right now to stream Twitch or Vimeo thanks to the newly-updated alpha for Oculus’ Social platform. For virtual reality enthusiasts, this is groundbreaking stuff — UploadVR calls this update the first time that people with consumer VR headsets could meet together in a virtual space — but it’s also not the most appealing sell. We don’t generally crowd around screens to watch Twitch or Vimeo, so the experience being simulated feels like more exception than rule.

Functionally, it’s more or less the Oculus Cinema experience, but with the twist that you’re no longer flying solo. Instead, you and four other disembodied heads — avatars in the form of aliens, cowboys, or blocky human faces — can look around and chat while you view.

The multiplayer roll-out of this update has been unusually quiet, at least from the official Oculus end, so it could be a sign Oculus is testing the waters for more mainstream media properties. (Social VR being the Zuckerbergian dream.) Fans of, say, the Royals, could watch together rather than fight for space in that one good Kansas bar; likewise, if Netflix, Hulu, or HBO come to VR living rooms, this opens up avenues for more flexible team binge-watching schedules. Your go-to Game of Thrones compatriot can be out of town for the evening and still share the experience? People will be able to Netflix and chill, in one sense, at a distance.

But this definitely feels like a half measure, a rollout designed to test a system built for bigger media properties. There’s a fairly robust herd of text-based commenters already on Twitch, if you’re looking for community — but there’s certainly appeal to watching League of Legends championships as a small cluster, particularly if your gaming buddies are scattered to the winds.