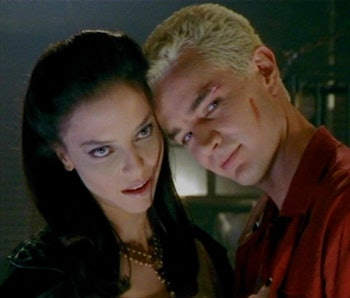 Joss Whedon has been MIA ever since Marvel broke his spirit, but now we’re finally finding out what he’s doing next — he’s appearing along with Tim Burton, Anne Rice, and other heavyweights of the vampire genre in a new documentary called A Place Among The Undead. The filmmaker is none other than Juliet Landau, a.k.a. Drusilla.

Landau played Drusilla as part Ophelia, part Lady Macbeth. Ruthless yet childish, fearsome yet pitiful, she goes down in history as one of the more iconic fictional vampires. It’s only fitting that she knows her way around them enough to make a documentary. Landau told Entertainment Weekly, “Whenever I’ve hung out with creators, writers, directors, actors, who have lived in the vampire universe, I’ve had the best conversations with them. I’ve always thought, I wish people could see this, the stuff that’s never been shared before, the camaraderie, and the insider’s view.”

She’s also made the bold claim that A Place Among The Undead is going to be “the most definitive vampire documentary ever made” and will feature a “who’s who” of the genre.

Landau is crowdfunding the project, because, according to her Indiegogo campaign:

“We met with a number of production companies who want to invest, but based on those meetings, we feel this can’t be made inside the system and be as truthful, authentic and special as it needs to be. We need YOU: producing partners that not only like what we are doing, but really LOVE and understand it!”

Let’s hope James Marsters makes that list, because unlike Spike, the whole world would care about a Spike and Drusilla reunion.

For more, check out Landau’s crowdfunding page or this Place Among The Undead panel: