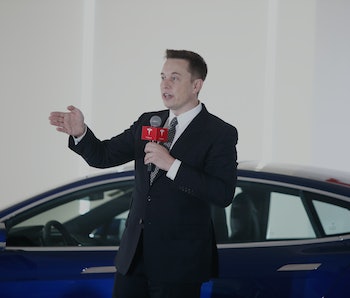 Tesla’s Model S is living up to all of the hype that buffeted its newest software update, and prevents fender-benders and traumatic accidents that could have left some drivers seriously injured or possibly even killed, according some Tesla motorists.

Among the lucky drivers is Jeffrey Katzenberg, CEO of DreamWorks Animation, who claims that Model S and all its technology prevented an collision from taking a grim turn. After Katezenberg shattered his wrist and totaled his car, he told the Hollywood Reporter: “Thank you Elon Musk, for saving my life”

Musk, for his part, deflected the praise, instead invoking everyday Tesla employees.

Entries on a Tesla Motors Club message board that extol the reaction time of the Model S Autobrake system, might dispel some of the anxiety and skepticism that blanketed very early reviews of the car.

Quite simply, fewer Teslas have been totaled and smashed into amorphous sheets of steel because of features like Autobrake and Traffic-Aware Cruise Control, and because of that, Elon Musk and his shadowy brigade of engineers might have some reason for a grin or two.

A user named Jsduda posted this on the message board:

“Car in front of me slams on brakes, while I am still accelerating through yellow. Alarm goes off and car brakes itself maybe a split second before I realized what was happening.”

“Friday I had to take a pet to a short-notice vet visit in heavy rain. On the way home a car slammed on the brakes in front of me, in the exact moment I was checking the passenger mirror to make a lane change. The collision warning sound alerted me and the car started to brake before I even realized what was happening. I’m pretty sure I would have hit them if not for the alert/auto braking. Pretty sweet.”

Now, if your typical motorist could only afford the Model S’ starting price tag of $70,000, then we might see less tow trucks and roadblocks syphon free-flowing traffic on highways everywhere.

More like this
Innovation
8.8.2022 10:00 AM
A wild new plane-train hybrid could whoosh you to your destination — if it can get off the ground
By Molly Glick
Entertainment
8.5.2022 12:30 PM
For All Mankind Season 3’s space mogul is better than Elon Musk — here's why
By Ryan Britt
Innovation
12 minutes ago
Want to buy an EV? Here’s what you need to know about the Inflation Reduction Act
By James Morton Turner and The Conversation
Related Tags
Share: