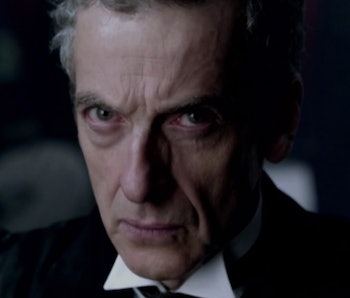 “The Woman Who Lives”, the sixth episode of Season 9 of Dr. Who, is the closest thing to a perfect episode we’ve seen during Peter Capaldi’s tenure as the title character. It had all of the elements of what Who fans have come to expect from a great adventure: plot-twists, double-crosses, a crown-wearing, a fire-breathing Thundercats reject for a villain, and even a shout-out to the fourth Doctor’s involvement in burning London to the ground (bonus points if you remembered that it was Peter Davison’s Doctor that started the fire, not the Terileptil).

A Doctor We Can Believe In

The cold open of “The Woman Who Lives” is possibly the most Doctor-like Doctor we’ve seen from Capaldi. From the bungling through the carriage during the robbery to the banter with Maisie Williams’ Knightmare, we find Capaldi doing a near perfect 21st century Patrick Troughton imitation. That isn’t a knock by the way. An updated take on the second Doctor — the whole hoodie-wearing Charlie Chaplin with a Scottish accent vibe — is perfect.

What really makes this iteration of the Doctor Who persona distinct is the doubt. We’re used to previous incarnations of the Doctor saving the universe in time for the closing credits without much reckoning for the unintended damage his actions may have caused. In just about every episode of the past seasons, there are at least a couple of minor characters who get the Star Trek “Redshirt” treatment, but rarely do they succumb to whatever horrible fate awaits them with more than a passing “I’m so sorry” and a shrug from the Timelord.

Capaldi’s doctor is much more uncertain and hesitant. Throughout this season you get the impression that each decision is a bit harder to make, and there is a struggle to acknowledge the unforeseen consequences his actions will have. In the season opener, we found that the Doctor had a sense of shame over his treatment of young Davros, and this week we see the Doctor struggling with feelings of guilt. Capaldi is finally owning his unique take on the Doctor character that show writers have been slowly building over the past season and a half.

He’s Not Heavy, He’s My Doctor:

Any good Doctor Who episode has to deal with larger philosophical themes. In “The Woman Who Lives” the topic of choice is immortality. For Williams’ Ashildr, immortality has been more curse than blessing; earlier in the episode she mournfully recounts all the people she has loved and lost over her 800 years, and as we see later in the episode, that has caused her to lose much of her humanity, especially how she values human life.

It’s not a stretch to see that Ashildr is a reflection of what the Doctor himself would be like if he let himself get too far away from humanity. One of the recurring themes in the post-Time War episodes — a call that we hear from almost every departing companion — is that the Doctor should never travel alone. For Ashildr, her silver lining is that human brains don’t have the memory for 800 years of life, but much like the Doctor, she documents her travels and also has a tendency to omit the parts she doesn’t care to remember.

OK, so listen, Moffat and Co. are notorious for dropping the more-than-occasional red herring (go ahead and Google “Moffat Who Red Herring” if you’re looking for a new rabbit hole to jump down on your lunch break), but Season 9 has already been a buffet of would-be-could-be-OMG-I-hope-really-is teasers.

We already know Clara is leaving by the end of the season, but the how of it remains unknown. In “The Witch’s Familiar”, Missy implied that Clara might end up being more enemy than friend, and in “The Woman Who Lives”, Ashildr comments that she remembers Clara, only because she makes it a point to remember people’s weaknesses. We also now know that the Doctor leaves both Missy and Ashildr as kinda-sorta friends, but if you let Missy tell it, the word “friend” has a much different meaning for Gallifreyans.

(By the way, did anyone catch Ashildr dropping that Anders Ericsson/Malcolm Gladwell “It takes 10,000 hours” reference? As far as I know that theory didn’t exist until the late 20th century … )

Perhaps the most tantalizing of all teasers was the reference to Jack Harkness. The Doctor assures Ashildr that Captain Jack will “eventually” get around to her, but that reference goes a bit deeper. True Who nerds can tell you that Struan Rodger, who plays Ashildr’s blind and deaf butler, voiced the Face of Boe character who had run-ins with David Tennant’s Doctor. In the Season 3 episode “Last of the Time Lords”, there was a less-than-slight innuendo that Jack Harkness would eventually go on to become the Face of Boe.

While it seems highly unlikely that John Barrowman will return to Dr. Who anytime soon, I would gladly be willing to pardon the existence of those ridiculous sonic sunglasses for the Doctor’s next 13 lifetimes if there was a sniff of hope of Jack Harkness returning in any capacity. Can you imagine a series finale featuring Missy, Ashildr, the exit of Clara, and a Jack Harkness appearance?

“The Woman Who Lives” proves the show is back on track after a bit of a lull in the past few episodes, and there have been just enough teasers to make sure that Who fans won’t miss a single episode. Even if Moffat is taking us for a ride on the Harkness front, Season 9 is finally firing on all cylinders.

More like this
Entertainment
Jan. 13, 2023
How Mike Colter's surprising first acting role prepared him for Plane
By Hoai-Tran Bui
Entertainment
Jan. 24, 2023
The Last of Us didn’t need spores — the replacement is perfect for TV
By Dais Johnston
Entertainment
13 hours ago
Doom Patrol and Titans' cancellations mark the end of DC's best era of TV
By Eric Francisco
LEARN SOMETHING NEW EVERY DAY.
Related Tags
Share: