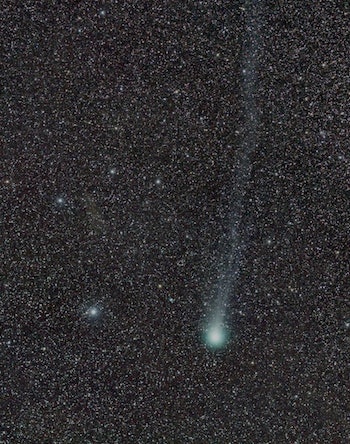 How’s this for some weekend news — even comets like to party. Researchers in France recently discovered Comet Lovejoy (catalogued as C/2014 Q2) releasing a ton of alcohol into space. You read that right — the same stuff in your pint glasses was just hurtling into the great unknown, about to be drunk by exactly no one.

The scientific stargazers at the Paris Observatory just released a paper in Science Advances that detailed the shock they had when they realized Lovejoy was just giving off massive amounts of ethyl alcohol along with a simple sugar (glycolaldehyde) and 19 other organic molecules in gas released by the comet. This is the first time that scientists have ever found ethyl alcohol in a comet.

Comets usually hang out far away from the sun (because, duh, partying at night is better?), but get drawn in closer to the star when there are gravitational changes in the solar system. When they get closer to the sun — and heat — the frozen comets end up releasing gases as they whiz by. That’s how scientists figured out just what Lovejoy was emitting. By looking at the atmospheric trail Lovejoy left behind, researchers were able to identify the microwave frequencies of various molecules — which is when they found the booze, so to speak.

“We found that comet Lovejoy was releasing as much alcohol as in at least 500 bottles of wine every second during its peak activity,” said the Paris Observatory’s Nicolas Biver.

With the discovery of the ethyl alcohol and the simple sugar, scientists are also showing that comets actually have complex molecular makeups. This supports the theory that comets may have contributed to the origins of life on earth.

So let’s all raise a glass (and not pour one out) for Comet Lovejoy, the hardest partying space debris in the galaxy.