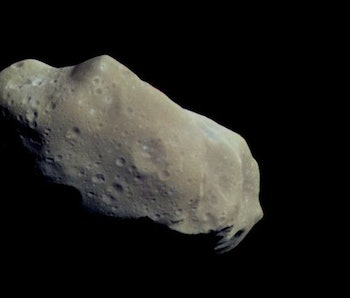 Now before you get into a Halloween tizzy, this asteroid is more Casper the Friendly Ghost than Poltergeist — meaning it doesn’t pose a threat to Earth.

NASA’s Jet Propulsion Laboratory (JPL) writes that the “asteroid will fly past Earth at a safe distance slightly farther than the moon’s orbit.” That means the scientists at NASA will take this opportunity to observe the asteroid by bouncing radio waves off of it and determining if it’s actually a comet based off of its shape and dimensions.

“This would be the first time that the Goldstone [Deep Space Communications Complex] radar has imaged a comet from such a close distance,” says Lance Benner of JPL’s asteroid radar research program.

Regardless of whether 2015 TB145 is an asteroid or a comet, you’ll still need to use some hardware in order to see this small piece of space debris on Halloween (especially during the daytime). “Even though that is relatively close by celestial standards, it is expected to be fairly faint, so night-sky Earth observers would need at least a small telescope to view it,” notes Paul Chodas of JPL.