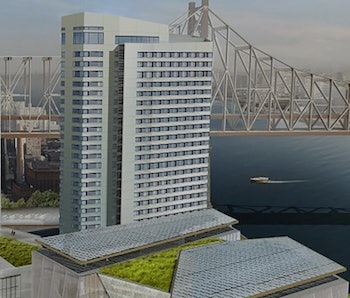 Thursday and Friday, ‘Inverse’ is covering the Municipal Art Society of New York’s sixth annual MAS Summit. More than 100 speakers and a thousand attendees are gathering over two days to discuss a wide range of issues affecting New York City, and brainstorming solutions that will help the Big Apple meet the needs of all New Yorkers in the five boroughs now and in the future.

One of the biggest problems with housing around the world is a lack of efficiency standards, which leads to a huge waste of resources and poorer health for residents. Some designers are looking to remedy these issues by building what are called “passive houses,” which adhere to an international standard that reduces energy consumption and encourages healthier, more comfortable living environments — all while reducing residents’ costs of living.

As the name suggests, passive houses work by controlling interior temperatures through an airtight exterior that traps air without using an active heating or cooling system that burns through electricity — making conventional temperature systems obsolete. To be a certified passive house, each household’s thermostat systems can’t exceed more than 15 kilowatts per hour over the whole year or 10 watts per square meter; the rest of the household’s energy demands can’t exceed 120 kilowatts annually; and most of the living space can’t rise above 77 degrees Fahrenheit.

When everything adds up, the buildings end up consuming 60 to 70 percent less energy than other structures.

Passive houses have caused quite the buzz over in Europe, with over 25,000 certified structures. Yet U.S. developers have largely ignored them, with passive house numbers lying somewhere in the double digits.

That’s about to change soon. At a talk on Friday at the MAS Summit, Arianna Sacks Rosenberg, the senior project manager for the Hudson Companies, discussed Cornell University’s plans to build Cornell Tech Residential, what will be the world’s tallest passive house, on Roosevelt Island. The goal is to create the first ever high-rise passive house, “the most rigorous efficiency standard in the world,” she said. Through this new graduate housing building, Rosenberg and her colleagues want to demonstrate the capability of building a sustainable housing project for communities experiencing big growth — especially for urban communities with populations expected to skyrocket over the next century.

The impetus isn’t just to make housing more affordable. Rosenberg pointed to the fact that 47.9 million tons of carbon dioxide emissions in the U.S. are caused by buildings — residential buildings responsible for more than 16.3 million tons.

It won’t be easy. Most passive houses designed to house more than just a single household are still pretty small. The average passive house apartment complex is only 16 stories tall. Cornell wants to build one that’s 26 stories high, with 350 residential units.

Besides more efficient with heating and cooling, Rosenberg and her team also want to implement an air flow system that improves air quality throughout the building. The key to all of this is an energy recovery ventilation (ERV) system that pulls in fresh air and removes stale air, while recovering energy in the climate-controlled air that’s exiting the building.

Cornell Tech Residential will also use many other sustainable design elements, like a facade that acts as an insulated blanket for the building, as well as a rising facade on the southwest side that allows the heating and cooling equipment on the ground level to breathe and cool off.

Overall, Cornell Tech Residential should spew 882 fewer tons of carbon dioxide every year than most other high-rise residential buildings.

Rosenberg acknowledges that being the first to build a high-rise passive house — especially in the U.S. — is “weird.” But she and her colleagues understand that this technology Europeans are already tinkering with will cross the Atlantic Ocean eventually. Rosenberg and her team would rather be on the forefront right now rather than play catch up later.

Hopefully, Cornell Tech Residential proves successful enough for other urban designers and building developers to start adopting passive housing standards in their own projects. “Our country is changing, and so is the world,” says Rosenberg. The sooner we all start taking sustainable design more seriously, the better off we will be in the long run.