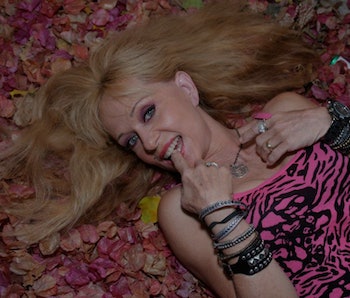 Forget your Jamie Lee Curtises and your Neve Campbells. You want a real scream queen? More importantly, do you want to know what a scream queen watches on Halloween? Meet Linnea Quigley. Her reign took root during the eighties, an era that witnessed a surge in b-movie horror, marrying the exploitation slasher mythos of the seventies with a gleeful splatter of blood. “I never dreamed I would even be an actress because I was so shy,” she tells Inverse, “however, my favorite genre was definitely horror.”

Since her first foray into the splatter field that shyness has faded. Quigley has racked up over a hundred credits including turns in cult classics Return of The Living Dead, Hollywood Chainsaw Hookers, Sorority Babes In The Slimeball Bowl-A-Rama, and Night of the Demons (that she dubs “a Halloween classic”.) As for the future, she lists a certain Nightmare On Elm Street baddie as one villain she’d love to go up against. “Freddy… I’d definitely want to beat his ass and not play “victim” the whole time.”

While the likes of Curtis and Campbell have dragged the scream queen milieu into the mainstream, they owe a debt to Quigley. The lo-fi slasher grit she cut her teeth on, is, after all, the type of stuff postmodern horror references. “It’s an honor!” she says of those playful homages. “However, they’re making about a hundred times more money and having bigger budgets than we were ever afforded.”

So what does a scream queen hunker down to watch when Halloween rolls around? Here are Linnea’s favorites listed, as she says, in no particular order.

Whatever Happened to Baby Jane?

Night of the Hunter