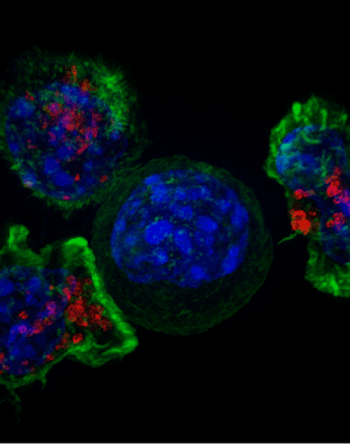 Getting rid of cancerous cells has always been a herculean challenge, especially because the method of delivering the cancer drugs can damage healthy cells. However, researchers from the University of Manchester may have devised a way to make it easier for doctors to administer those drugs without sacrificing a patient’s valuable healthy tissue.

In a series of studies to be presented at the National Cancer Research Institute Cancer Conference in Liverpool on November 2, researchers will show off some newly developed drug “grenades” that specifically target tumors thanks to the grenades’ heat sensitivity.

The grenades in question are actually liposomes, which are tiny manmade vesicles that are created out of the same material as cell membranes. These bubble-like liposomes are filled with drugs and released into the body to bring a medicinal payload to specific cells. “Using [liposomes] to deliver cancer medicines has been a holy grail of nanomedicine,” says the chair of this year’s NCRI Cancer Conference, Professor Charles Swanton.

This latest development may make liposomes even more effective by only affecting cancerous cells that have been heated up a little higher than the average human body temperature to 107.6 degrees Fahrenheit. The research team used heating pads and warm water to warm up the cancerous cells in their lab tests, but noted that probes or focused ultrasounds could be used in future instances for more pointed accuracy in human trials.

“Once [the heat-sensitive liposomes] reach a ‘hotspot’ of warmed-up cancer cells, the pin is effectively pulled and the drugs are released. This allows us to more effectively transport drugs to tumours, and should reduce collateral damage to healthy cells,” says Kostas Kostarelos, a professor of nanomedicine at the University of Manchester.

The research team successfully used the heat-activated, antibody-targeting grenades on mice and human melanoma cancer cells in the lab, reporting a moderate uptick in survival after receiving the treatment.

Traditional drug-filled liposomes have been a great help in the fight against cancer, but these new heat-activated cancer grenades could be a huge step forward in cancer treatment.