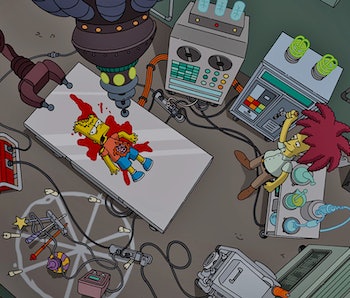 Tonight, The Simpsons’ annual “Treehouse of Horror” episode hit the airwaves, and after 26 of these, dedicated viewers have built up some expectations over the years — both good and bad.

First things first: the infamous couch gag. This year’s minute and a half long segment was done by Ren and Stimpy’s John Kricfalusi in a sufficiently creepy (and kinda crass/gross) fashion, in keeping with Kricfalusi’s work on the Nickelodeon show.

After poor Bart was subjected to a seemingly infinite loop of Sideshow Bob’s vicious revenge (and getting offed in myriad ways), there were a few viewers that thought the gag was, well… overkill.

One thing’s for sure, there were just as many folks (if not more) that loved Sideshow Bob’s declaration of victory that 24 years of trying to kill a 10-year-old child have paid off.

Kelsey Grammar will always hold a special place in Simpsons lovers hearts, even if he’s been less ubiquitous since his Frasier days.

What about the rest of the episode? Haters gonna hate.

But when “Treehouse of Horror” is an annual Halloween tradition, it doesn’t really matter if it was “good” or not.