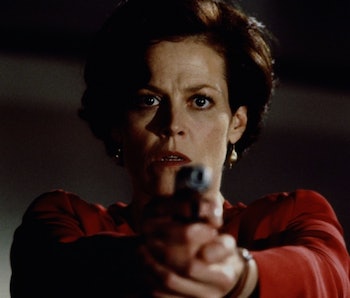 Four weeks after Seven debuted in theaters, another serial killer flick opened, and was promptly buried in the shadow of David Fincher’s tour-de-force. Copycat harbors none of the stylistic ambition that propelled Seven onto countless best-of lists, although that hardly seems its intention. Its flashes of cinematographic verve and routine plotting are far less dramatic than Fincher’s. By design, this is a by-the-numbers ‘90s thriller.

With a by-the-numbers ‘90s trailer.

Is competence anything to be ashamed of? Not if the finished product is as fun as this. San Francisco backdrops this story of a killer whose victims are part of his plan to achieve the same notoriety as famous serial murderers throughout history. By aping those killers’ most recognizable crimes, he becomes the copycat.

Director Jon Amiel steers this plot with confidence, a feat in and of itself, given a screenplay that occasionally buckles beneath the weight of its ham-fisted dialogue. And what better actor to deliver some of that expositional guff than Sigourney Weaver, a performer uniquely gifted to make us believe any goddamn thing she tells us. As criminal psychologist Helen Hudson, she opens the film delivering a lecture on serial killers, an albeit contrived method for clueing us into her forte and the motivation of the film’s villain. Suffering an ordeal — at the hands of Harry Connick Jr’s over-the-top redneck psycho — that results in her debilitating agoraphobia, Hudson plies herself with booze, pills, and online chess to cope with being housebound. A year later the copycat starts picking off victims. Coerced by two SFPD detectives Monahan and Goetz, played by Holly Hunter and Dermot Mulroney, into helping their investigation she returns to her livelihood, liquored up and brusque.

Parallel to Weaver’s curmudgeonly turn is Hunter’s wide-eyed detective. Their co-op mission: two capable women undeterred by the slew of casual misogyny tossed their way. A long, uninterrupted tracking shot of Monahan exploring the first crime scene speaks volumes of Amiel’s perspective toward the screenplay. Which, bursting with outdated gender riffs — the precinct lieutenant referring to Hunter’s forward-thinking cop as a ‘pushy broad’ and the matter of the murdered victims being mostly female — is hardly progressive. Those let-downs are made somewhat better by Weaver and Hunter, whose odd couple routine works to spur the other into action. The movie passes the Bechdel Test due to their back-and-forth patter, interspersed with wider considerations of workplace politics that still pulses with truth.

Unlike Seven, it’s never weighed down or reliant on making a grand statement. The type of twisted justification for disposing of sinners offered by John Doe reflects his views on the degradation of society. It’s a high-brow attempt to bring panache to a notion that Travis Bickle referred to simply as “washing the scum off the streets.” The copycat killer, and the film in which he plays out his rampant fantasies, isn’t interested in assassinating contemporary culture. Amiel’s goal? To craft a solid good vs. evil thriller.

And the setting of Weaver’s agoraphobic doctor is exploited to the fullest for that very purpose. She can’t escape her luxurious waterfront apartment — making her a rat in a cage, or as she terms it ‘a lamb tied to the stake.’ As a narrative device keeping a main character stationary demands a certain amount of creativity — to prevent audiences from remembering that they’re essentially watching Sigourney Weaver get drunk in her pajamas for two hours. In many ways, the movie’s most tense sequences occur with the doctor and the detective in separate locations, hashing out developments over the phone. Monahan walks into a crime scene that even for her — someone who’s not well-versed in serial killers — begins to ring a bell, realization hits with a chilling thud. “It’s Berkowitz, isn’t it?” she asks Hudson, miles away, “He’s doing Son of Sam.”

From that point on the movie betrays some of its initial promise. There has to be resolution, a forced-upon moment wherein the copycat reveals his master plan, and it almost falls flat. Weaver plays that lengthy scene whilst hoisted above a toilet and outshines the actor snarling his way through a villainous soliloquy. Ending the movie on a brasher note, indicative of the copycat’s butchery, might have etched it onto the public consciousness a little more. After all, it would have been fitting to end the movie with the last kill on his list — Ted Bundy’s two-girls-in-one-day. But would Weaver or Hunter have taken a leaf out of Gwyneth Paltrow’s book, and offered up their heads on a platter?