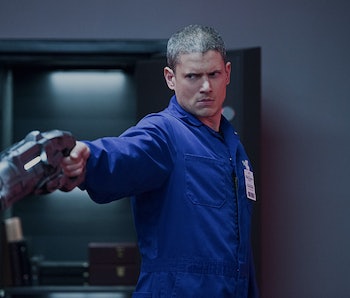 DC’s crossover series Legends of Tomorrow, airing January 2016, will unite heroes from DC’s TV universe that aren’t Green Arrow or The Flash into one elite #squad. The team will include The Atom, White Canary, Firestorm, Hawkgirl, Hawkman, and Rick Hunter as well as Captain Cold and Heat Wave, who are both — for those keeping track — bad guys.

Last night’s episode of The Flash, “Family of Rogues,” Dominic Purcell’s Heat Wave was absent, leaving Wentworth Miller’s Captain Cold in charge of doling out enough exposition to make it to Legends of Tomorrow.

Captain Cold has been a super criminal in the series with varying degrees of super villainy in comic book lore. But he’s never been a monster. There is just enough warmth in his heart to keep him from teetering to the likes of other villains like Arrow’s Damien Darhk.

But Captain Cold is hardly a hero — not yet, anyway. He’s lived by a thieve’s code, but he’s never shied away from mortal sins. What has allowed Cold to maintain his humanity thus far is his relationship with his sister, Lisa, (a.k.a. Golden Glider) whom he killed his father to save. He is capable of sentiment, but he’s also capable of violence — and lots of it.

Is this the end of Captain Cold, enemy of The Flash, and the start of Captain Cold, anti-hero? His and Heat Wave’s selection to be in Legends of Tomorrow is the most eyebrow-raising choice made so far. Captain Cold will never be a hero, so we get the sense that what’s being assembled isn’t so much an Avengers-style team as a motley crew. That’s more compelling anyway.

More like this
Entertainment
7 hours ago
The Acolyte timeline hints at how it could change Sith history
By Dais Johnston
Entertainment
5.20.2022 2:30 PM
'Umbrella Academy' Season 3 release date, trailer, cast, and plot for the Netflix superhero series
By Mae Abdulbaki and Mike Bloom
Entertainment
5.18.2022 9:36 PM
Kate Siegel says Netflix’s Fall of the House of Usher is “like nothing anyone has ever seen”
By Dais Johnston
Related Tags
Share: