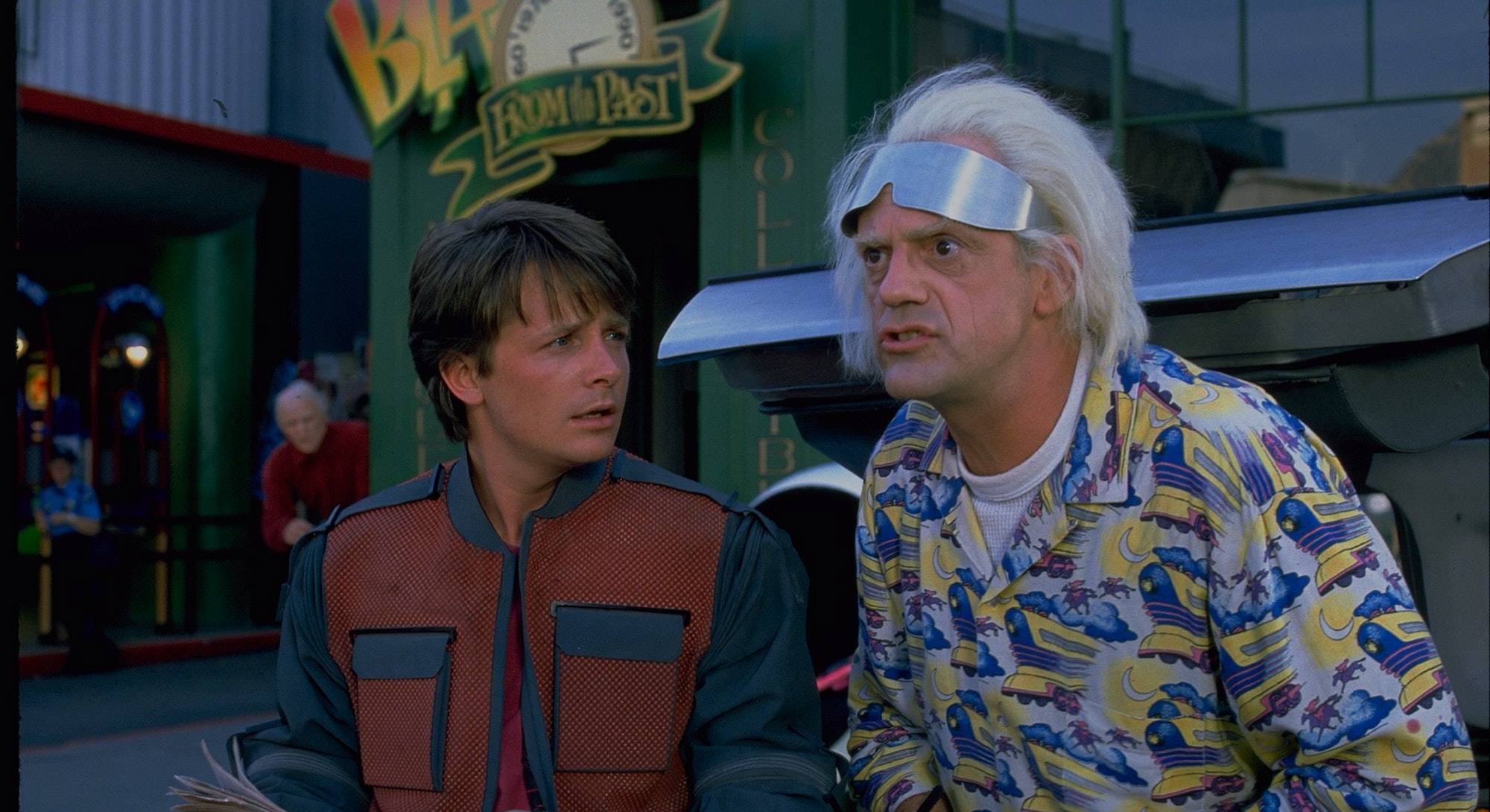 As the saying goes, the future is now. In the case of Back to the Future Part II, the future is literally now. October 21, 2015 is the day that Marty McFly and Doc Brown head off from 1985 into the distant future. So what did director Robert Zemeckis and screenwriter Bob Gale guess correctly about their future, i.e., our present? The present future may not include flying cars, self-drying clothes, dehydrated dinners, zero internet, or ubiquitous fax machines in every room, but at least the Chicago Cubs might win the World Series.

Granted, the filmmakers set out to make pure entertainment rather than pull a Nostradamus to actually predict what 30 years into the future would look like. But a lot of what we see of 2015 in Part II is spot-on. Here’s what they got right.

The living quarters of the average American is connected in every way possible these days, with internet-ready flatscreen TVs in every room, voice controlled tech like the Amazon Echo, and even little robots that will vacuum for you. The McFly house of the future may not completely look like a contemporary domicile — see: the aforementioned fax machines — but it definitely saw that tech would invade the home and make things easier at the same time they made them more difficult.

The glasses and watches that function as communication and entertainment tools in Part II are eerily similar to products like Google Glass or the Apple Watch. Doc Brown can use his matte silver specs to see around the DeLorean or ask for directions, while Marty Jr. and Marlene McFly use their shades to answer phone calls while eating dinner with the family.

You could make the case that Marty Jr. and Marlene’s goggles were made for watching virtual reality TV as well. But the real prediction about VR and 3D movies comes when Marty stumbles into a “Holomax” theater showing Jaws 19. 3D is basically the norm for big tentpole movies, while the impending release of the Oculus Rift hopes to bring about the VR entertainment revolution.

Speaking of Jaws 19, the movie also accurately predicted the proliferation of endless sequels and franchises that have taken over big budget filmmaking. Marty running into Jaws 19 playing at the local theater may have been a satirical little hat tip to Part II itself — and to executive producer Steven Spielberg by listing the nineteen-quel’s director as his son Max — but it nailed the Hollywood moneymaking machine of 2015.

Incoming calls don’t necessarily have to be over the phone anymore, especially when making shady business deals. Grown-up Marty’s coworker Needles calls him on a video phone to undermine their boss, which puts grown-up Marty into such hot water that he gets fired. It’s a great plot device, but it also anticipated the regular use of video conferencing from things like FaceTime or Skype.

This one could be a small stretch, but bear with us. When Needles (played by Red Hot Chili Peppers bassist Flea) makes the deal with Marty, Needles’ call also features a continual list of personal data below his name. You get to see Needles’ occupation, age, birthday, address, alcohol preferences, and hobbies. This comprehensive list of attributes is similar to the metadata gathered from us everyday — not too far from Facebook’s m.o.

Marty’s boss, Ito Fujitsu, also has metadata attributed to him when he reveals he was monitoring Marty and Needles’ call. But the fact that he was listening in also points towards the Snowden-esque surveillance culture of 2015. Somebody’s always watching, maybe even your boss.

Time Warner Cable and other cable providers flout hundreds of channels even though you probably only regularly watch a handful of them. When Marty’s girlfriend, Jennifer, is snooping through her future house, she spies on Marty Jr. who struts into the living room and watches six TV channels at once. It’s a slight dig on both our contemporary tendency to consume entertainment with a second (or third, fourth, or sixth) screen, but also that the hundreds of TV channels available to us show pure drivel.

Gone are the weathermen. Back to the Future Part II had the wherewithal to realize that we could use a device to predict when it would rain and what temperature it could be down to the hour, just as Doc does in the movie.

USA Today is still around, and whether tech savvy people like it or not regular folks like Doc still get their news from newspapers. And get this: Today (and probably only today) the newspaper is going with that bitchin’ fictional masthead.

Biff pays for a taxicab by scanning one of his fingerprints. While biometrics like this have been around for awhile now, we enjoy the fact that he used it as currency. Envisioning a world with the freedom to not have cash or even cards on you predates payment methods like Apple Pay or Google Wallet that you use through your personal devices.

When he stumbles into the Cafe ‘80s, Marty finds himself at a throwback Wild Gunman arcade cabinet. Marty proceeds to ace the game, but two kids (one of them is a pre-fame Elijah Wood) denounce it saying, “You mean you have to use your hands? That’s like a baby’s toy.” Hands-free complex gaming systems like the Microsoft Kinect for the XBox One have turned gaming from a simple hobby into a total interactive lifestyle, even if you’re a little kid.

Marty is horrified when Doc begins pulling his skin off, only to realize that he’s merely been to a rejuvenation clinic. Doc gets a “hair repair,” changes his blood, replaces a few inner organs, and replaces his skin in order to appear younger. While those details are mostly pure fantasy, plastic surgery is a more than common occurrence in 2015. Last year in the U.S. alone, plastic surgeons performed 15.6 million cosmetic procedures and 5.8 million reconstructive surgeries. That’s a lot just to look young.

No, Pepsi Perfect isn’t a real thing, though in celebration of Back to the Future Day the soda company is releasing a limited edition version of what’s in the movie. But back when it was just a movie prop it was another satirical jab at soda companies continually marketing supposedly new flavors of the exact same thing. Currently, Pepsi has six different variations of its signature drink. None of them is perfect.

The drones in Back to the Future Part II are primarily used to walk dogs. Current drones are usually things owned by the military that scan wide areas and blow up criminal suspects without due process. But you can also buy one from the Apple store and put your phone in it to take ridiculously high panoramic photos. Whether it’s now or BttF’s predicted future, drones are an accepted thing, and they’ll soon have to be registered.

This one is a bit tenuous, but you just have to look at it the right way. The iconic Hill Valley town square is equal parts the same and different when Marty and Doc show up in 2015. The clocktower facade is still made from stone, but features futuristic glass updates. The dilapidated parking lot in front of it from 1985 changes to a serene park and lake 30 years later. Chalk it up to the contemporary design aesthetic of honoring architecture’s past but giving it a contemporary spin. Think of the High Line in New York City, or the many historically significant buildings in London that sit beside ultra modern office buildings.

In the future of Part II, you fly up to a fueling station and the pump refuels your car automatically. We can’t help but think of Tesla’s new charger prototype being developed for its electric cars and how Zemeckis and Gale called it decades ago. The only difference is that gas still rules in their movie, and it still does today. Though the case can be made that the DeLorean and its Mr. Fusion engine runs on garbage, so alternative fuel was still being tested out even back in 1985.

The pièce de résistance of Back to the Future Part II is the hoverboard. Many have jested about their ability to provide maximum shreddage without any wheels, but only a few prevailed. Hendo is one company that Kickstarted its project for a hoverboard, while Lexus introduced its Slide hoverboard. Unfortunately they’re not available for consumers yet, but hopefully in a few years they’ll be available for anybody to flee from Griff and his cronies. Just make sure you have power.