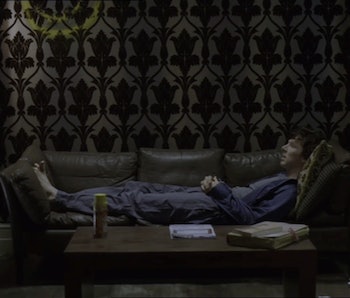 On BBC’s Sherlock, Benedict “Cumberbatch” Holmes attacks the hardest mind puzzles by slapping on nicotine patches and turning off the lights. This behavior is played off as part of his suit of eccentricities, but it’s actually just smart: Less light means fewer distractions. While science has long showed that dimming lights turns up clarity, new research is bringing the unexpected reasons for this to light. Turns out that it’s less about what the darkness shuts out than about what it enables.

Culturally, we associate light with transparency and upright behavior, but it turns out that bulbs make us stranger than we might otherwise be. While science has long showed that dimming lights turns up clarity, new research is feeling around the edges of why. Turns out that it’s less about what the darkness shuts out than about what it enables.

For one thing, darkness makes it easier to think analytically because it makes our emotions less distracting. Dr. Alison Jin Xu, an assistant professor of marketing at the University of Minnesota, discovered an unexpected link between bright lights and emotional intensity, publishing her results in the Journal of Consumer Psychology in 2014. While popular science tells us that sunshine makes us more optimistic, Xu found that exposure to bright lights tended to make any emotion — whether positive or negative — more intense.

In her study, Xu asked participants to rank a series of random things under dim and bright lights. Under bright lights, spices were spicier, hot girls were hotter, fictional bullies were more aggressive, positive words were more positive, and “favorable” juice was delicious. Under dim lights, the spices were ok, the girl was ok, fictional bullies kinda sucked, positive words were ok, and “favorable” juice was fine.

It’s no secret that emotions cloud judgment. Everyone from business professionals to the Toronto Blue Jays enlists the help of psychologists to help them stay as objective as possible. What Xu’s study does is provide evidence that the extent to which emotions mess with decision making can be mitigated by controlling the amount of light we’re exposed to.

And then there’s the effect the darkness has on creativity. As anyone who’s gotten flirtatious in a dim bar can attest, darkness makes people feel more uninhibited, which psychologists have discovered leads to a boost in creative thinking. A 2013 study from the University of Stuttgart published in the Journal of Environmental Psychology provided evidence that darkness made people feel like they were free of their constraints, triggering a more “risky, explorative processing style” that was associated with creativity.

In the study, participants were asked to solve creative “insight problems” under different lighting conditions. The people in the dimmest room, who reported feeling free and less inhibited, got significantly more of the answers right at light levels of about 150 lux.

The average office has light levels of about 500 lux, whereas broad sunlight reaches levels of about 100,000 lux. According to the Hong Kong Department of Labour guidelines on office lighting, 200 lux is the lowest any workplace should go. And, yes, the fact that you sit next to a big glowing rectangle is relevant, if hard to account for.

What is fundamentally clear is that most Americans (and Hongkongese) make bad decisions in environments built for better decision making, and better decisions in environments optimized for emotion. Does this mean that corporations need to reach for the dimmer switch? Maybe not. Sheer rationality isn’t always in a manager’s best interest and injury lawsuits are very expensive, but perhaps darkness is a resource worthy of greater consideration.

We aren’t all detectives, but that doesn’t mean we shouldn’t have the opportunity to turn out the lights and let logic rule.