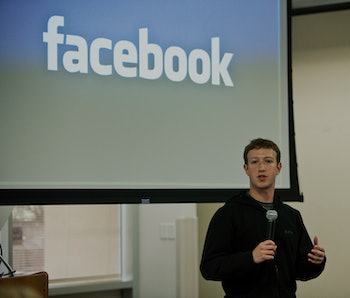 Facebook’s Chief Security Officer Alex Stamos has announced that the website would notify users if the government were secretly accessing their private information. The announcement comes in the wake of more Edward Snowden leaks that detail just how the United Kingdom’s Government Communications Headquarters, in particular, was spying on a massive number of citizens.

Stamos’ statement is very, very vague, which he even addresses: “To protect the integrity of our methods and processes, we often won’t be able to explain how we attribute certain attacks to suspected attackers.” He continues:

“While we have always taken steps to secure accounts that we believe to have been compromised, we decided to show this additional warning if we have a strong suspicion that an attack could be government-sponsored. We do this because these types of attacks tend to be more advanced and dangerous than others, and we strongly encourage affected people to take the actions necessary to secure all of their online accounts.”

Basically, it looks like Facebook has been aware, at least to some degree, of these types of attacks. That’s not to say the site has allowed them to happen, but just that it never notified users of the specific source of the attack until now.

But why has Facebook now decided to protect accounts when this sort of government-sponsored espionage has, apparently, been going on since at least 2007? The Snowden leak is the likely impetus behind the newfound transparency, since it revealed GCHQ had a specific service called “SOCIAL ANTHROPOID,” which could gather cookies and analyze metadata on social media connections, among other private personal interactions.

More like this
Innovation
8.14.2022 10:00 PM
60 years ago, an iconoclast designer revealed a fix for our biggest tech problem
By Tim Gorichanaz and The Conversation
Innovation
7 hours ago
Tesla software updates reveal a potential roadblock to electric vehicles’ expansion
By Vivek Astvansh and The Conversation
Innovation
1 hour ago
This high-tech camera may help protect our identities — here's how it works
By Molly Glick
Share: