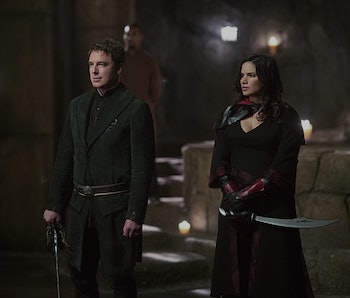 This week’s Arrow ended with Sara Lance’s gross corpse being dug up by Laurel and Thea. They will (somehow, past customs) bring Sara’s body to Nanda Parbat where Malcolm Merlyn and the League of Assassins possess the Lazarus Pit, an enchanted pool that can bring the dead back to life.

And you can see a decent chunk of these scenes right now in a low-quality promo from Warner Bros. TV’s Asian markets.

In just thirty seconds we see the return of John Barrowman as Merlyn as he warns Laurel that the Pit “changes” the people it revives. They basically become more dangerous. It makes dinner parties awkward.

One wrench this commercial throws into our assumption of Arrow is that John Constantine — who will guest star the week after next — isn’t involved in this particular attempt to bring Sara back. Will Laurel and Thea be unsuccessful? They have to be foiled in some way. The producers have gone on record saying it’s Constantine who will help resurrect Sara, and he’s nowhere to be seen here.

There is a U.S.-released trailer for next week, but it focuses on Chris Argent’s villainous Double Down instead of Sara.

Arrow airs Wednesdays at 8 p.m. EST on The CW.