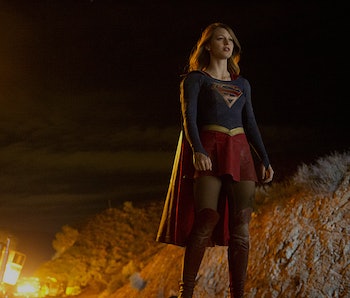 There are a lot of superhero shows on TV this season, but Supergirl, premiering Oct. 26th on CBS, hopes to stand apart from its contemporaries by embracing the simple fact that Supergirl is, well, a girl. And they should! Come Oct. 26th, there will be nothing else like Supergirl on TV.

But one question remains about the show: What about Superman? He’s definitely in the universe of the show, but could he potentially show up when the odds are way against Kara Zor-El?

According to the Supergirl prodcuers, Superman isn’t going to show up “because it’s not about him.” Greg Berlanti, Andrew Kreisberg, and Sarah Schechter and pilot writer Ali Adler made that clear in a recent HitFix interview.

“Supergirl is such an interesting character and is so under-explored that the opportunity there was so enormous,” said Shechter. “[Superman] is just sort of a shadow in the back of her psyche, and I think that’s the right way to portray him because that’s how she experiences it.”

Even if he’s not going to show up, what Superman is this? Is it supposed to be Richard Donner’s Christopher Reeves? Brandon Routh? Henry Cavill?

It’s none of them. And to Shechter, “it doesn’t matter.”

“It’s a version of Superman and what he has gone through in the world that we live in and the things that he’s faced and what’s happened to him vis-a-vis how it reflects on Kara is all our invention,” says producer Andrew Kreisberg.

With Superman busy having to tussle with Batman in Batman v. Superman: Dawn of Justice and forming the big-screen Justice League after that, it’s actually a relief to not expect the World’s Finest Boy Scout to show his mug on Supergirl. It’s not his show, plain and simple.