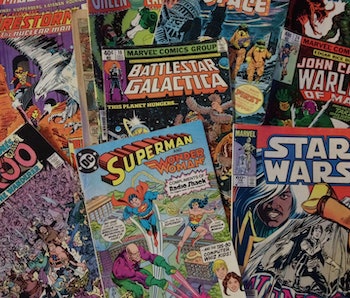 I’m no comics expert. That didn’t stop me from volunteering to take a peek at a treasure chest of old comic books that once belonged to my friend’s brother. Immediately, my mind raced with possibilities: could the holy grail of comics be in among this pile of ‘80s back issues?

With little awareness of what constitutes a must-have comic — except for Action Comics #1 and New Mutants #98 — I turned to the tools at my disposal: the internet and the lifelong experiences of a dedicated comic book collector. Along the way I picked up a few helpful guidelines for the average reader who might consider turning a casual hobby into a serious pursuit. I also managed to put a price tag on my newfound collection of nostalgia.

First things first: which comics are we talking about?

There’s got to be at least one gem in there, right? A RadioShack promotional Superman/Wonder Woman issue? A bloomin’ Star Wars story that’s entered my life right before the next movie comes out? Eighties treasures in this contemporary comic boom must hold value. Maybe I can sell them off to help my friend fix her car.

The potential earnings of the pile would, I later discovered, cover the cost of two pairs of wiper blades.

Searching the internet for a reliable pricing hub is tricky. How can an amateur properly evaluate a source? To get the ball rolling I retrieved a comic from my own very, very small collection: Buffy The Vampire Slayer #1. The First Issue.

Scooping it up back when I was a teen for a mere £4 ($2.75 — its original cover price) I assumed its value would soar and one day I’d pass it onto my grandchildren, a gloriously out-of-date pop culture token of my affection. It’s Buffy! A beloved TV heroine whose adventures continued in the leap from the small screen to the page; we never did get a Season 8 onscreen but we did in the panels. To own a slice of vintage, 1998 comic book heritage, Buffy’s comic toddlerdom, would definitely, without a shadow of a doubt, be worth something.

Last I checked it was worth about three bucks.

A search of recently sold eBay items revealed that a signed copy fetches $15. This tactic I picked up from the folks at SellMyComicBooks, who stress the importance of a reliable annual valuation guide (more on that later) and a nose for sniffing out the truth in online auctions. An unsigned, pristine copy of Buffy #1 is worth sweet F.A. It’s currently valued at $10.

The lesson here being: vintage isn’t value. Of course not. Anyone who’s seen Antiques Roadshow has witnessed the blank expressions on hopeful faces when the presenter informs them the porcelain bowl isn’t a remnant from the Ming Dynasty, but rather, a chamberpot that someone unimportant shat in.

Searching the web had brought back little encouragement. Issues varied from a buck to $8 or $9 if they were in decent condition. What is very good condition, and what’s terrible? A faint odor of mold wafts out of the bag I’ve been keeping the comics in, so I suspected they weren’t tip top. I had to know for sure.

I sought help in JD Sweet, a social sciences teacher at my local high school, whose off-hours find him collecting, grading, selling, and trawling flea markets for comics. A devout comic book reader and collector since he was a boy, the expertise flowed before we’d even ordered lunch. “Title and condition is what I’m looking for on the first go-through,” he explains, flipping through the pile. “These are all in good condition but none of the titles leap out at me.” Good condition, eh? Not bad for a newbie.

Except in terms of comic books “good” equates to a 2.0. The condition of a copy is graded according to a scale used by the likes of CGC, the Certified Guaranty Company, who are the leaders in comic grading. The lowest score of 0.5 is for a damaged, well-thumbed, and possibly soiled book. The highest is a 10.0, termed a “gem mint.” Perfect condition.

It’s not, as I had so wrongly assumed with Buffy, just the first issue. It can be, certainly, but it also encompasses many other tenets. A moment in that comic’s history where an important character is introduced, or an iconic figure dies. Even an insane crossover.

The great thing about key issues is that they hold their worth. Take The Walking Dead #19 — the first appearance of a certain katana-wielding badass. It’s valued according to the Overstreet Comic Book Price Guide at $225 for a 9.2 graded copy. An ungraded one in “fine” condition recently sold on eBay for $198. Its 9.8 CGC-graded equivalent — that’s also signed by artist Tony Adlard — sold for $700. “Michonne’s fictional. She won’t get drunk in real life and wrap her car around a tree in real life,” JD tells me, comparing the matter of collecting comics to baseball cards. “That’s the thing with comics, the events within them will always remain the same no matter what. Michonne will always make her first appearance in The Walking Dead issue #19.”

So you’ve got a key issue, what’s the next best move?

Get it graded. A key issue that’s graded by the CGC is a solid start to a collection. A key issue graded and signed is where you get a real toehold on the market. Get the word out that you’re in possession of a signed copy of The Amazing Spider-Man #129 (the first appearance of the Punisher and the Jackal) and you might be the only person claiming that unique item. While a mint copy is most desirous with specialty issues, middling grades can still hold a significant value.

How to start a collection

If you’re serious, it’s a commitment. “Look at this,” JD says, picking up the latest issue of The Walking Dead from the racks at Avalon Comics, our local emporium. “If you wanted to start with this particular series, you’d buy three: one to send off for grading immediately, one to keep in your collection, and one to read.” He selects three from the batch on the shelf and signals which he’d purchase for each purpose.

Where to start? Don’t waste your time clutching onto new issues just for the sake of it — find something you love reading and go from there. Remember, this is supposed to be fun.

Ambling around the store I notice the dollar bin stuffed with the same type of issues clutched beneath my arm: cool stories in bad condition. Another customer hulks a plastic crate chock full of comics onto the counter that he’d been given by a neighbor. None are of interest to the store. What about my batch, would they be a worthy purchase? Not especially. This pile of comic books is valued at $32. At that price, I might as well read ‘em.

More like this
Entertainment
Feb. 5, 2023
Everything You Need to Know About DCU’s Batman: The Brave and the Bold
By Mónica Marie Zorrilla
Science
Jan. 29, 2023
NASA-funded study to research if bacteria could help form building materials on Mars
By Matt Williams and Universe Today
Innovation
Jan. 25, 2023
Starship orbital flight: SpaceX successfully loaded the rocket with over 10 million pounds of propellant
By Mike Brown and Molly Glick
LEARN SOMETHING NEW EVERY DAY.
Share: