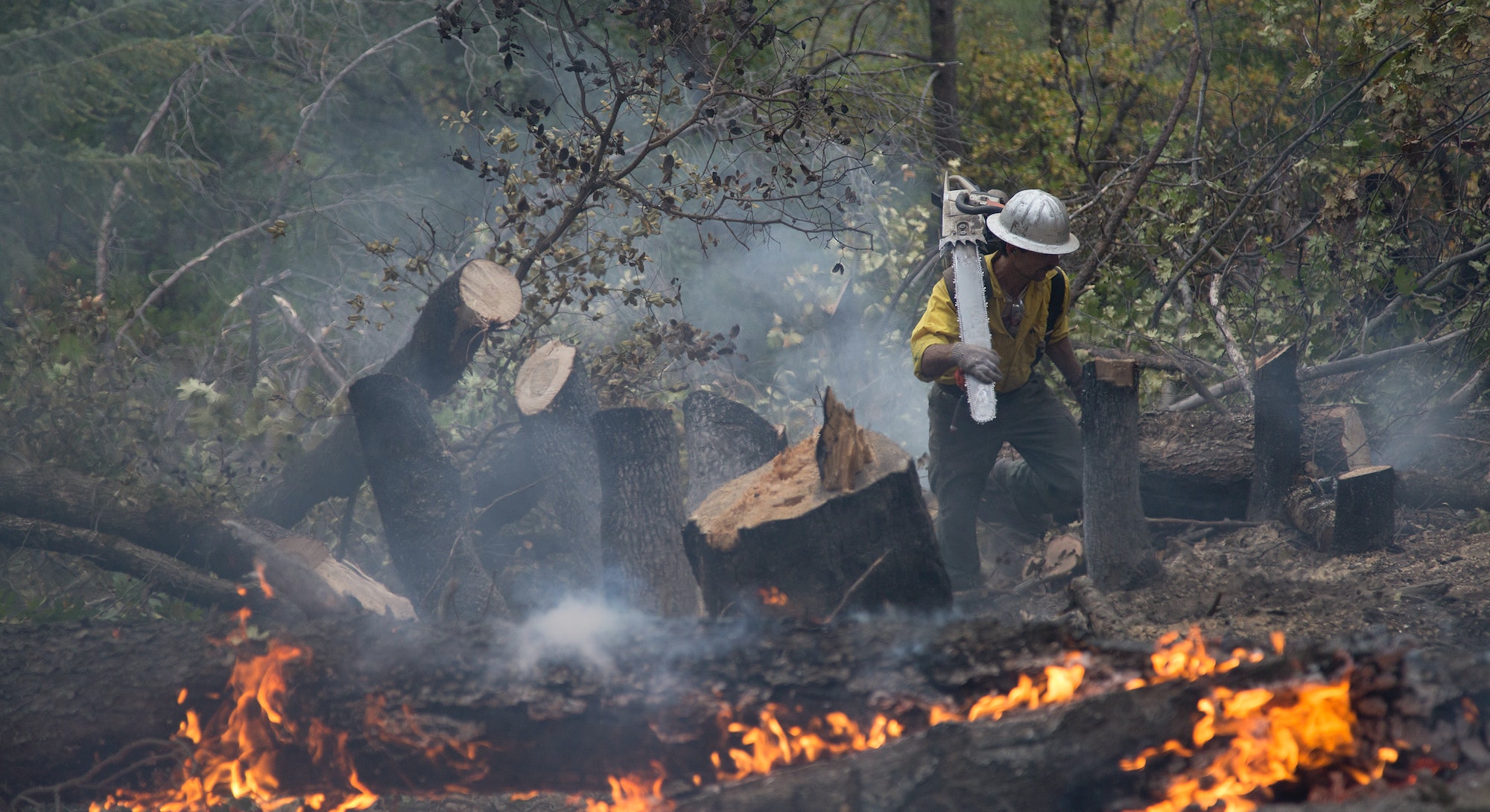 On Monday, the news broke that California was considering allowing inmates with “violent pasts” to participate in the state’s firefighting employment program. By Wednesday, officials said the plan was already scrapped. And later reports revealed that excluding inmates with violent backgrounds may not be so simple. As it turns out, they’ve been participating in the program for a long time.

A state correction official this week revealed that 38.6 percent (1,441 of the 3,732) of inmate firefighters had committed a “violent” crime. Department of Corrections and Rehabilitation spokesman Jeffrey Callison said different definitions of what actually constituted “violent” was the reason for the mix-up, reported the Associated Press. Callison said he simply misunderstood the department website’s claim that participants “must have no history of violent crimes under California’s penal code.” He called it “a thoroughly misleading statement.”

Prior to Wednesday’s revelation, another Department of Corrections official, Information Officer Bill Sessa, told Inverse that the state’s DOC is developing a plan “based on the presumption that an inmate who has been free of disciplinary problems for many years and who has been participating in rehabilitation programs poses less risk than an inmate who has not made that effort.”

“In addition to their technical conviction, we believe an inmate’s behavior that is sufficient to earn a minimum security status should be a mitigating factor in considering them for fire camp duty,” Sessa says.

Sessa was very careful with his comments, but he’s part of a group that was pushing for the proposal’s passage — that is, before they realized it was already in effect.

Although it can be justifiably scary to read about violent inmates participating in public endeavors that pose the possibility — however slight — of escape, without access to beneficial programs, rehabilitation could be stunted.

Washginton, D.C.-based attorney Malcolm C. Young believes the program is a positive one, telling Inverse prior to Wednesday’s news, “it would make sense to look to see who, among the people doing this work, are candidates…and give them additional training or skills or related training so they could go on once they got out, and be terrific applicants for people who are hiring. It’s just gonna be a positive experience and hopefully…it will benefit them.”

Young started getting involved in sentencing issues in the early ’80s. He was executive director of Washington, D.C.’s Sentencing Project, as well as Chicago’s John Howard Association. Most recently, he was a Soros Justice Fellow, which afforded him the opportunity to write his 2014 position paper “The Returning Prisoner and the Future of Work.”

For Young, one of the biggest issues with recent news is simply the term “violent.”

His words strike very differently from those of Sessa, who writes: “It is important to note that all state prison inmates have committed crimes that the average person would consider violent and serious. That includes inmates who have worked on fire crews for the last 50 years. Otherwise, they would be housed in county jail and not in a state prison to begin with.”

In many ways, both are correct. Few would argue that convicted criminals should be given the same opportunities as the rest of the workforce. At the same time, a matter of classification should not prevent a person from learning from those mistakes and growing.

“In some states, a residential burglary is classified as a violent offense. It’s a serious offense, but it doesn’t mean the person that’s convicted of it is necessarily more violent than someone who committed a burglary of a non-residential building.”

Even with differing views on participants, both Sessa and Young agree that the program is necessary and important. Sessa writes, “inmates have said that they value the fire camp program for the life lessons it teaches.”

In addition, Sessa points out that “the recidivism rate for inmates who parole from the fire camp (50 percent) is 10 percentage points less than [California’s] overall recidivism rate.”

They also agree that selection is very important: “Every inmate firefighter’s life is on the line, and that requires that we only choose the inmates who are committed to the program and the discipline it takes to work as a firefighter.”

Young, likewise, put his faith in the state, saying, “if the corrections department makes a determination that a person…is a pretty good risk to working on a firefighting crew…for a lawmaker or someone on the outside to say, ‘Oh, you shouldn’t be doing that,’ it’s really shortsighted and maybe damaging the community to which the person will come out, maybe as a greater risk because they didn’t have this advantage of this experience and even earning a little bit of money.”

That “little bit of money” is another important sticking point for Young. Those in the program are paid only $1 per hour, which he says is unacceptable: “I think they should be paying these guys more, and thinking of it as something that will benefit the state, benefit the community, and benefit the people involved.” He continues:

“It’s not a good policy, in my view, to use prisoners, basically, because they’re $1-a-day discount labor.

“[The California Department of Corrections] should tie this up with the idea that people who are doing this work, with the risks involved and presumably the community good involved, ought to be able to benefit from that, leaving prison with some kind of nest egg and financial ability to get themselves going. That would solve a lot of problems.”

Hopefully, the newly uncovered details of “violent” inmate employment do not hamper further progress for incarcerated people. California’s program, as it stands, has been successful, at least as far as employing prisoners. As Sessa wrote, “The ability to make a commitment to a job, taking on responsibility, learning how to work with people from other ethnic backgrounds…are all life lessons that have enabled them to make their post-prison lives a success.”

Young offers a similar sentiment: “The results are gonna be better when they come out into the community than they would’ve without involving them in this program.”