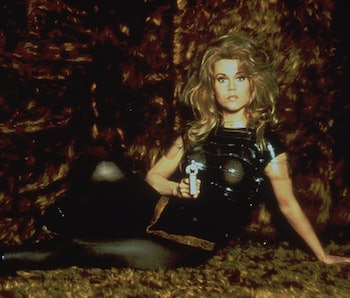 NASA doesn’t prohibit its astronauts from engaging in sexual activity. The agency doesn’t even enforce a “no fraternization” policy. Is this because our space agency is sexually liberated? Not really. It’s because in zero gravity, sex is nigh impossible.

Earthbound sex is, on the whole, pretty straightforward. There’s physical freedom to romp around that the cramped conditions of space transport don’t provide. There’s also gravity, which helps keep us locked into place. Without that metaphorical extra hand, the logistics “might be a lot more challenging and a lot less fulfilling than most people think” says NASA bioethicist Paul Wolpe.

Simply put, our bodies have a nasty way of obeying Newton’s third law, which states that for every action there is an equal and opposite reaction. Having to cope with adjusting basic biological functions causes a domino effect that makes intercourse difficult. The biggest challenge for male astronauts is maintaining constant blood flow, a tricky matter when immersed in a zero-gravity environment. Even rodents blasted into space (in the seventies no less) struggled to keep their paws on each other.

If two parties do manage to overcome all those seemingly insurmountable odds, there’s still the mess. Perspiration (and other stuff) lingers in the air. Even with processors that aim to recycle astronaut sweat and urine, the whole endeavor could get disturbingly globular in a hurry.

Regardless of the logistics, zero-g sex remains a major trope in science fiction. Here are the best examples of the theme. What do they have in common? Every instance is more aspirational than realistic. Thank goodness for that.

Barbarella is fundamentally a movie about Jane Fonda being beautiful and inspiringly weird. At one point, she almost dies from orgasming too much. Yet it’s the opening scene, which features the titular character’s weightless self appreciation, that remains the most memorable. It’s a sort-of masturbatory strip that achieves scientific inaccuracy in the kitschiest way possible.

Preposterous doesn’t even begin to cover this scene from the most seventies of the seventies James Bond flicks. We see 007 celebrating his triumph over Hugo Drax by taking Holly Goodhead — no guesses for her sexual specialty — into a secret chamber for some space lovin’. Aside from the brilliantly bad effects work and one-liner innuendos from Q, the act itself is straight-up fantasy.

Combining two popular tenets of culture — sci-fi and vampires — Tobe Hooper managed to create a wholly bizarre villain in the shape of Mathilda May’s blood-sucking space vamp. She’s naked for most of the movie, including the finale. One brave astronaut sacrifices himself by making love to the nude seductress, her returning ship hovering above, pulling the pair upward with its glowing retractor beam. It’s the noble thing to do.

The creators of Police Academy channel the farcical nature of Airplane for a scene that involves Jennifer Tilly taking her boyfriend into a zero gravity chamber at NASA. It’s hardly a serious go at recreating what the experience might be like — and it’s hardly hardcore sci-fi — but the filmmakers are at least aware of the silliness.

You might think the prospect of surviving a perilous maze of booby-trapped death rooms would dull one’s libido. Not for the inhabitants of the Cube sequel, whose desires intensify. The act between these two characters takes place in a reverse gravity room, turning their sex session into an arty twirl that also accelerates space-time. Their intertwined bodies continue spinning until they’re both mummified corpses because whatever.