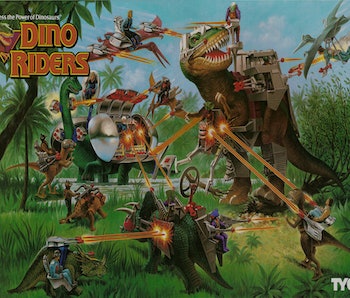 Gerry Conway didn’t give a damn about dinosaurs or paleontology or truth. When he created the television show Dino-Riders, the next piece of Mattel IP headed to the big screen, he cast head-butting Pachycephalosaurus across from Dimetrodons, which died out hundreds of thousands of years before the first cretaceous concussion protocol. He gave Tyrannosaurs a weird upright posture and Brontosaurs big wet eyes. His world, politically defined by a war between benevolent alien humans and weird evil snake/locust dudes, was pretty much the land before time, albeit with way more lasers.

Dino-Riders had a 14-episode run in 1988, but it would be wrong to think of it as a failed franchise. In truth, the show was garbage, a lazily animated Transformers knockoff with “Take on Me”-style intro animation and He-Man haircuts. The [writers’ bible for the series](http://www.dinoridersworld.com/Bible%20(May%2019,%201988) described the Ankylosaur as “used in combat” and explained that the Tyrannosaurus Rex has “an unquenchable thirst for vengeance.” It was all completely insane and very stupid, which is why the show doesn’t deserve a reboot, much less the major motion picture adaptation it’s positioned to get. The toys the show was designed to sell, on the other hand, absolutely do. The toys were magnificent and represent all that is righteous, good, and, well, Valorian (a word that autocorrects to Valerian in Text documents because HBO doesn’t fuck around).

TYCO, the toy company that produced the show, was ultimately in the sculpted plastic business and, in the late eighties, business was booming. The company attracted high-end talent and tried to differentiate its products by offering quality. This is why the animation on the show looks like it belongs on a plasticine placement and the art on the toy boxes has gone low level viral (think: otitis media) for the better part of the last decade.

It’s no wonder the toys work better than the show. The franchise idea came from TYCO’s VP of Marketing and was mocked up by Warren Bosch, the company’s director of research. It all started with a painstakingly painted Deinonychus with a burly blonde on its back. The model drove home two points: The concept worked and the toys needed to move to be fun. The toys eventually released to the public were impressively jointed and dynamic. Dinosaurs came with riders, but really, consumers were buying the animals and an excuse to imagine them fighting. The Smithsonian was so impressed they had TYCO make a dinosaur collection for its various gift shops.

Turns out that bashing plastic dinosaurs together is actually a decent Hollywood elevator pitch. Without even discussing the fact that Jurassic Park seems headed in the dino-riding direction anyway, it’s fair to say that “Harness the Power of Dinosaurs!”, the show’s catchphrase, is an exhortation worth heeding. Marvel did just that with a few issues of a pretty terrible and weirdly emotional “Dino Riders” comic, but whoever takes on the franchise for Mattel and Solipsist Films will — if the studio is being smart about this — be handed toys and told to just do whatever. This kind of worked for Transformers, definitely worked for The Lego Movie, and was arguably the formula behind Entourage, which was successful in its own right.

In a sense, the thing Dino Riders has going for it as a property is that no one gives a shit about the Dino Rider canon. There are no hardcore fans to appease here. The people who remember the Dino Riders mostly just remember hitting beautiful pieces of injection-molded plastic into each other. That’s a beautiful, pure memory and the movie will be beautiful and pure too — totally unsullied by thought or meaning or plot.