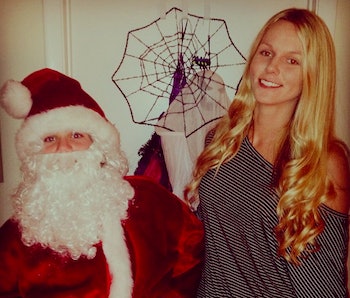 Want to make people think this Halloween? Dress up as Santa Clause. Seriously, ditch your political costume ideas (Wayne LaPierre) and put on a fake beard. Researchers have proven that the culturally unexpected trumps the offensive but unsurprising.

“Culture sets up a general blueprint for the way things should work, so that if things unfold as we expect, we don’t have to think,” Daphna Oyserman, the new study’s corresponding author, wrote in a statement presenting her work. What her team wanted to find out is what happens when we’re faced with the jarring.

For their study, published this week in the journal Social Cognition, the researchers took advantage of local holidays, weddings, and funerals to run small-scale experiments. At a Fourth of July party, they brought white plates to mix in with those patterned with stars and stripes. Similarly, they brought Halloween plates to a Labor Day gathering stocked with patriotic plates. At both parties, an actor — “chatty Jim” — surreptitiously took plates out of guests’ hands and set them on a scale.

They found that the Halloween plates were piled with less food than both the patriotic plates at the Labor Day picnic and the white plates at the July Fourth picnic.

Cultural disfluency, the researchers theorize, jolts individuals out of mindless states, turning their attention back toward details. As the results suggest, culture-shocked people are less likely to overeat, just as they’re less likely to buy things impulsively.

In another series of tests, groups of participants were shown photos of a “traditional” white-gown, black-tux wedding or a “culturally disfluent” purple-tux, green-gown wedding. Participants that looked at the traditional photos were more likely to make errors on subsequent cognitive reasoning tests and make impulsive purchases.

The results from six other similar experiments showed similar patterns. Cultural fluency, it seems, increases mindless consumption. When we’re faced with situations that seem culturally weird, we make the switch from “associative” brain processing to a “rule-based” approach, which can lead us to make better decisions. Culture shock, it turns out, might not be such a bad thing after all.