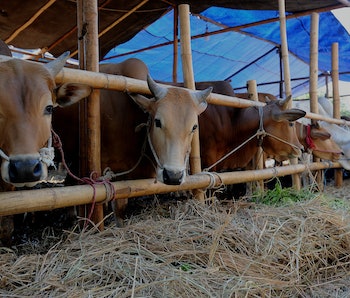 A new law signed Saturday by California Governor Jerry Brown heavily regulates the use of antibiotics in the livestock industry, and cites “the development of antimicrobial resistant bacterial infections,” or superbugs, as a prime cause for the legislation.

According to the Centers for Disease Control and Prevention, superbugs, which develop as a result of the overuse of antibiotics in medical and commercial settings like farms and hospitals, reportedly kill 23,000 people a year and cause 2 million infections worldwide.

The first law of its kind in the United States, the new law bans the use of antibiotics meant to promote physical growth in various farm animals sold for profit: Cows, chickens, and pigs among them. Under the law, livestock can only be administered antibiotics if the drugs are prescribed by a veterinarian to specifically treat disease or infection.

“The science is clear that the overuse of antibiotics in livestock has contributed to the spread of antibiotic resistance and the undermining of decades of life-saving advances in medicine,” Brown said in a statement.

Although Brown vetoed a similar bill last year, the scientific consensus surrounding superbugs was enough to get the law, authored by state Senator Jerry Hill, signed into action.

A 2015 report authored by the Center for Disease Dynamics, Economics and Policy underscores the worldwide impact that unregulated use of antibiotics have had on both humans and animals. The report, titled “State of the World’s Antibiotics 2015,” contends that over 80 percent of the antibiotics in the United States are used on animals, primarily to strengthen them to ward off infections and communicable diseases that could be transmitted to humans.

Alarmingly, the report also states that cattle, pigs, and poultry regularly subjected to antibiotics develop “significant populations of antibiotic-resistant bacteria, which are transmitted to humans through direct contact with the animals and through their meat, eggs, and milk.”

Terry Lehenbauer, director of Veterinary Medicine Teaching and Research Center at University of California, Davis, is less convinced that all antibiotics should posit red flags for the livestock industry and for people who consume meat. Antimicrobial “resistance is a natural phenomenon; it has always been just a part of the reality and ecology of bacterial growth,” he tells Inverse.

Lehenbauer also is quick to shed light on some of the most grim statistics set forth by the CDC that blame thousands of deaths and millions of infections on antimicrobial resistance.

“The vast majority of those [cases] are typically associated with hospitals and healthcare environments, and related to direct use of antimicrobials in human patients,” Lehenbauer says. “But certainly animals and animal agriculture is part of the entire spectrum that we’re concerned about.”

“I think this law is trying to say, how can you do this in the best possible way so we can keep antibiotics working and reduce the chance or the pressure for increasing resistance.”

SB 27 is set to take effect on January 1, 2018. In 2006, the European Union also banned the use of antibiotics to promote growth in livestock.

More like this
Mind and Body
Sep. 18, 2022
This common mosquito-borne virus can be deadly — and researchers don’t know enough about it
By Rebecca Trout Fryxell and The Conversation
Innovation
Sep. 21, 2022
Gaming tech could ease pain during surgery — here’s how
By Sofia Quaglia
Innovation
Sep. 20, 2022
A rodent "backpack" could speed up cancer drug discovery
By Hannah Thomasy
Related Tags
Share: