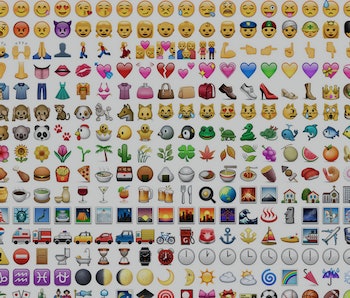 In the future, anthropologists will uncover our ancient URLs and find images of text message conversations executed entirely through emojis, the 21st Century’s answer to hieroglyphics. Thanks to the Unicode Consortium, those anthropologists might have a few dozen more emoji to decipher.

The Unicode Technical Committee, a.k.a. the emoji gods, have just announced their annual list of potential new emoji. There are 67 candidates on the list, which will need to go through committee approval in May of 2016 before they can become official emoji.

Let’s back up a second. What’s the Unicode Consortium? And what’s Unicode?

Unicode is basically like a language for computers that translates every character, from letters and punctuation to numbers and (yes) emoji, into its own unique number. This standard of encoding has been adopted by the tech industry to cut down on corruptions in files that have differing assignments for either numbers or characters. For example, if one company assigned the ampersand (&) one set of numbers and another company gave it a different set of numbers, those two coding systems would conflict and create problems for their users.

The Unicode Consortium set out to create a universal system of characters and corresponding numbers. That includes emoji, each of which needs to be approved by the UTC before they be officially admitted to the system.

Until then, let’s check out the different sections of emoji wannabes, complete with their code points, chart glyphs, color glyphs, and names.

This will be especially useful for Beauty and the Beast fans.

Do we really need a scooter and a motorized scooter?

We’re baffled that there was a ticket emoji that actually says “John Appleseed World Tour” existed before there was a drum emoji.