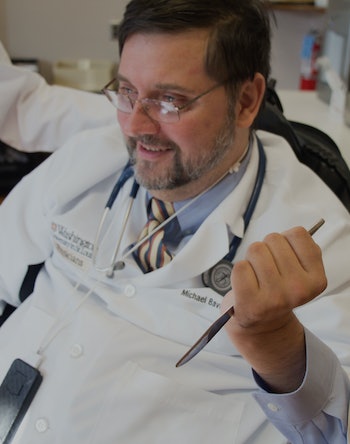 In July 2012, Michael Bavlsik was driving a van-load of Boy Scouts, including two of his sons, home from camp in Minnesota, when he collided with a boat being towed behind a pickup truck and flipped the vehicle. His 11 passengers were mostly unharmed, and escaped out the rear doors. But the roof of the van collapsed in on Bavlsik, crushing his neck. He was paralyzed from the chest down.

“They had quite a time getting me out of the vehicle,” Bavlsik tells Inverse. “They needed quite a number of extrication crews, and finally by the time they got me out and put me on a helicopter, they took me to the nearest trauma centre.”

He was conscious during the rescue, but the details are a little bit of a blur, he says. Surgery got his vertebrae back into alignment, but his spinal cord had been irreparably damaged.

“It left me basically with no leg function, no pelvic or abdominal function, no hand function at all, and very little arm function. I could bend at the biceps in both arms — the shoulders were fully intact. I had the ability to extend my wrists back on both sides, but I couldn’t squeeze or lift anything with my hands.”

Despite the obstacles, Bavlsik was back at his work as an internist and primary care physician within three months of the crash. Over time he figured out little hacks to make the various tasks of his work possible.

“How do you examine a patient? How do you listen to someone’s lungs? How do you look in their ears? How do you poke on their belly when you’re sitting in a wheelchair? That took a fair amount of give and take to try and figure out how to do some of those things.

“I had some really amazing patients that were just shockingly patient with me with some things. I learned to examine patients in a chair rather than on an exam table. I put some modifications on otoscopes and ophthalmoscopes to make them thicker so I could sort of hold them in my hand, to look into somebody’s mouth or eyes or ears. Basically I started off with a stethoscope that one of the occupational therapists modified with some zip ties and sticky tape on it, to just make it accessible so I could get my hands into it and put it on my ears to listen.”

Those tasks have gotten a lot easier over time thanks to an innovative surgery being pioneered by doctors at Washington University in St. Louis. Nerve transplants are helping some quadriplegic patients, including Bavlsik, regain some function in their arms and hands.

Thanks to the surgery, Bavlsik can now grip medical tools, hold a pen to write, and drive.

“It really has been a wonder. I can function a whole lot better than I could before, and that’s really made a big difference. I’m about, at this point, 95 percent as active in my medical practice as I was before the accident.”

The success of the nerve transplant technique in people with a spinal cord injury is detailed in the October issue of the medical journal Plastic and Reconstructive Surgery.

The surgery works by commandeering a healthy nerve from the patient’s shoulder or upper arm and splicing it onto a nerve that used to control the lower arm or hand.

Over time, the healthy nerve grows along the path of the second nerve, eventually linking the brain back up with new muscles.

“We’ve developed what I would consider a sort of clever workaround or way to bypass the central nervous system issue,” lead author Ida Fox tells Inverse. She is a plastic surgeon and assistant professor with Washington University School of Medicine in St. Louis.

The surgery offers an alternative for some patients with spinal cord injuries to the more traditional tendon transfer, which is popular in Europe but has gained little ground in the United States.

That surgery requires months of downtime and rehabilitation, and many of Fox’s patients either don’t have the resources to support that, or don’t like the idea of regressing and once again being dependent on others for daily tasks, she says.

With a nerve transfer, on the other hand, some patients can resume normal activity within days of surgery.

“It was nothing. I stayed home for a day, and went to work the next day,” says Bavlsik. “”Even though it was this very long operation which left me with these two long scars on my arm, the arm was fully functional the next day. There was no cast, there was no splint.”

It can take months or years for new functions to start showing up, and they come very gradually.

“It was a frustratingly slow process to see the function come back, and for a while I didn’t think I was going to get anything back in the hand,” says Bavlsik. “But when I look back at what I was doing before I certainly see a big difference.”

Patients can continue to see improvements in function many years after surgery, as their muscles get stronger and their brains learn to use the new neural pathway more effectively, says Fox.

Often the surgery results in very small measurable gains in terms of muscle function, says Fox. But these little improvements can mean a very big difference in terms of the independence of her patients.

Almost three years after surgery, Bavlsik is still learning how to do new things. “The other day I went to the supermarket and when I checked out I was able to pick up the stylus that you use to sign for your credit card and sign for it myself for the first time.”

Being able to drive has made the biggest difference to his life, he says, because he no longer has to rely on others for transportation. He uses a bar installed in his van, and pushes it down to accelerate and forward to brake.