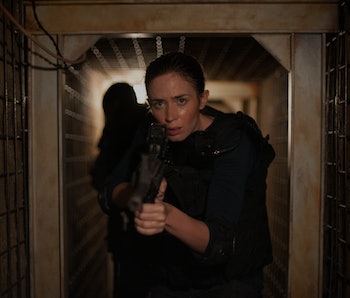 Director Denis Villeneuve’s drug cartel thriller Sicario has been putting up some solid numbers at the box office. Between its badass performances by Emily Blunt and Benicio del Toro, and its convenient place in 2015’s cartel craze, the often brutal movie looks to slowly be making itself into a don’t-miss experience. Part of that experience is the impressive — and surprising — amount of CGI.

A video posted by visual effects team Oblique FX shows just how much went into the virtually unnoticeable effects that are woven into the fabric of the story. It goes to show that CGI isn’t just reserved for giant fighting robots or superheroes saving innocent civilians in an apocalyptic battle. Slight spoilers ahead:

It is used for explosions in Sicario, though. It’s also used to incorporate a bunch of other background details, including everything from rows of giant aircraft to bodies hanging from an overpass. It just reminds you that some of the best CGI is virtually indistinguishable from the real elements happening around it.

A big hat-tip to Oblique FX for their stellar work.