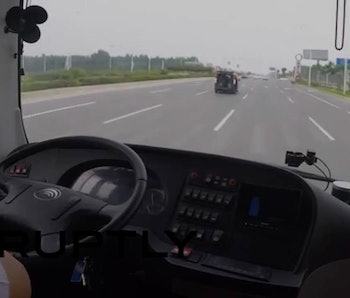 This bus driver is totally lounging out because he’s driving, err, not driving a self-controlled bus. Google is trying out self-driving cars and Japan is working on robo-taxis, but China’s Yutong has test-driven the world’s first self-operated bus, CityLab reports.

According to a press release, the bus traveled 32.6 kilometers (approximately 20.3 miles), reaching a top speed of 68 kilometers per hour (about 42.3 mph). It apparently did all the normal driving stuff successfully: switching lanes, stopping at traffic lights, etc. Because of its size, the bus also has a “laser radar and cameras on four sides of the vehicle,” which give it “a panoramic view.” It’s hard enough for a human to drive a bus, so the various angles are very necessary for maintaining the passengers’ safety.

The driverless bus does have a downside. It promotes environmental friendliness because of the large number of people it can hold, but buses already do that. Removing the driver wouldn’t actually mean more room in the vehicle, as with a car. At the same time, more lives are at risk when testing out a prototype technology. Yutong says the bus still must undergo testing for “basic movement control, driving on average road conditions, and driving on race lanes” — hardly a finished product. Drivers get frustrated with slow-moving buses on the road, too, which increases the likelihood of unforeseen hazards. It’s easy to imagine a car (or two or 20) cutting off the bus, leading to a bumpy, unpleasant ride.

With the bus, self-driving vehicles are now being tested for personal use, public transit, and private transit. Of the available options, it’s difficult to see public transit catching on soon (when it’s ready). It’s the most likely to be unsafe, plus an attendant would still be required to keep an eye on the passengers and ensure their well-being in the bus. Still, the promise of better roads, filled with driverless vehicles, makes continued testing worthwhile.

More like this
Innovation
13 hours ago
Want to take a road trip in your electric vehicle? Prepare to go off track
By Molly Glick
Innovation
8.17.2022 6:15 PM
Can we terraform Mars? Scientists may have made a major breakthrough
By Jeff Nagle
Innovation
8.17.2022 3:05 PM
Scientists create fake leaves that generate a clean fuel source
By Sarah Wells
Share: