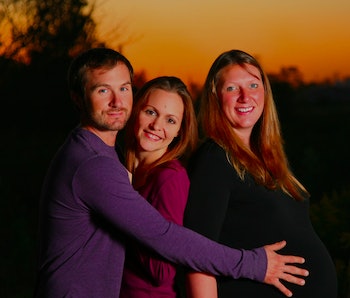 The first baby with three biological parents will be British and could be born as early as next year.

If that shocks you in a sort of benign way, you’re not alone. Ethically speaking, we don’t really have a framework for dealing with this sort of essentially good biological breakthrough. Scientifically, at least, there is a concrete explanation for what it entails: The embryo starts off as embryos do, with one sperm and one egg, but a third parent subs in her mitochondria — the cell’s tiny energy factories — before the embryo develops into a baby. The resulting child effectively has three parents: Genetically, it’s half dad, 49.9 percent mom, and 0.1 percent mom number two.

Three-person babies represent hope for the small subset of the population (estimated at 152 British women and 778 American women each year) that risks passing on mitochondrial disease to their kids. In middle school textbooks, mitochondria are affectionately nicknamed the “powerhouses” of the cells, referring to their role in pumping out cellular fuel, but there’s a lot these molecular engines do. When they stop working, as they do in people with mitochondrial disease, the symptoms range from the loss of motor control, gastrointestinal disorders, or even seizures, depending on which cells are affected. There’s a lot that can go wrong and a lot that we can’t predict.

The disease is a big enough problem that “mitochondrial replacement therapy” — the technical term for making a three-person baby — was hotly debated in UK courts for over a decade. It was finally approved in February of this year by the House of Lords. Under the new regulations, which come into effect at the end of October, clinics have to apply for a license to attempt the procedure by November 24. The first three-person conception could take place as early as the end of the year.

Supporters of the treatment, including UK Health Minister Earl Howe, think it’s cruel to withhold treatment from would-be parents with mitochondrial disease. The open question is about risks: What are they?

The House of Lords obviously wouldn’t have legalized mitochondrial replacement therapy if there hadn’t been compelling evidence for its safety. In a 2014 paper published in PLoS Genetics, scientists at Newcastle University and Oregon Health and Science University defended the method they helped pioneer, citing perfectly healthy three-parent rhesus macaques and their offspring as proof that their technique works perfectly well.

Thing is, there’s a lot we still don’t know about how interchangeable mitochondria from different parents can be, and some researchers worry scientists are jumping the gun. Mitochondria are only ever passed on from mothers, which is why all of the “third parents” involved in this treatment are female. They’ve been so well conserved that they’ve been used to trace a family tree grouping all humans into mitochondrial “haplogroups.”

Mitochondria are sort of like miniature cells within cells — with their own DNA and their own proteins, which interact with the other cellular proteins. Under normal circumstances, the mitochondria is pretty comfortable being inside its cell — they have, after all, evolved together over the years. But it isn’t clear what happens when that mitochondria is switched out with somebody else’s — especially one from a different haplogroup.

In light of these concerns, the Human Fertilisation and Embryology Authority, who advised the UK government on their decision, went so far as recommending haplogroup matching as a precautionary step in late 2014 before the government decision was announced. As it stands now, the British three-parent embryo is still a go. Whether that embryo will develop into a healthy three-parent baby remains unclear. And we haven’t even gotten to the custody issues yet.