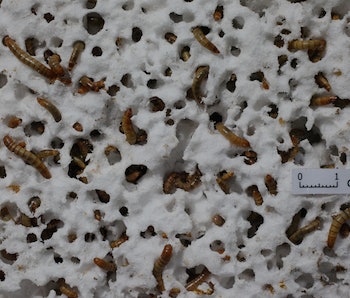 If Stanford researcher Wei-Min Wu’s ideas reach their potential, we need to consider putting his face on money. Plastic is a slow-motion apocalypse that’s choking landfills and permeating the global ocean — 93 percent of all kids six and up test positive for the plastic chemical BPA. We throw away enough of it every year to circle the planet four times. Plastic is where petroleum goes to kill us when we don’t burn it to choke us in the atmosphere.

Into this disaster ride Wu, of Stanford’s Department of Civil and Environmental Engineering, and his team, beared hundreds of common mealworms that were raised from birth on a diet of nothing but styrofoam. The worms digest it into equal parts carbon dioxide and a non-toxic byproduct they pass as little rabbit-dropping-shaped waste that works as a soil additive. The mealworms themselves are perfectly healthy. Americans throw out about 2.5 billion styrofoam cups per year which we had no way to degrade so, yeah, yeah, kind of a big deal, guys.

“Our findings have opened a new door to solve the global plastic pollution problem,” Wu said in his statement, leaving the question of which month he’d prefer his national holiday to fall in up to the masses.

This research is the first evidence an animal’s gut bacteria can effectively degrade plastic, potentially giving the world a host of new, better waste management options. Until we scale this up, though, for the love of your great-grandchildren, eat off real plates and drink out of cups that you can’t crush between two fingers.