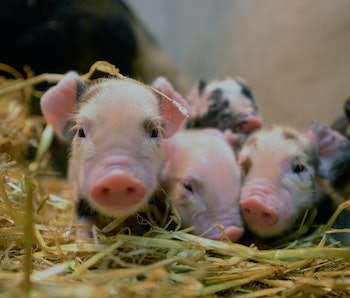 “Obviously, this has to be regulated,” Yusuff Abdu tells Inverse. “You can’t let lab-engineered animals out into the public. There is a high chance they could get into the wild and offset an ecosystem if they happen to have an advantageous trait. Lab rats and mice are kept out of pet stores for a reason.”

But the Beijing Genomics Institute — renowned for its breakthroughs in sequencing the human genome — is ready to bring its genetically modified micropigs to the public as pets.

Like all GMOs, the gene-edited pigs will eventually be subject to regulation, but current guidelines on genetically modified pets are unclear or nonexistent.

At roughly 30 pounds, the mini pigs grow to be about the same size as medium-sized dogs. They were originally produced for researching gut bacteria and stem cells, but BGI is now planning to sell the tiny pigs as pets — with a price tag of $1,600 each. (BGI promises that future pet owners will also be able to customize their micropig’s coat color and pattern through further gene editing.)

To engineer the pigs, the researchers started with diminutive Bama pigs and used gene editing to make them even smaller. Whether or not the pigs are ultimately used for research, it’s a valid use for gene editing — and, realistically, an inevitable one — but some scientists aren’t sure whether it’s the best application for genomics research right now.

In an interview with Nature, geneticist Jens Boch at the Martin Luther University of Halle-Wittenberg poses this ethical question:

“It’s questionable whether we should impact the life, health and well-being of other animal species on this planet light-heartedly.”

Either way, “It’s just way too early to hand over the pigs to the general public,” Adbu tells Inverse. “The scientists should at least study the pigs for a couple more generations before handing them over to pet owners.”

More like this
Science
6.28.2022 10:00 AM
How are drugs absorbed in the body? The science of medicine, explained
By Tom Anchordoquy and The Conversation
Science
6.26.2022 11:00 PM
The powerhouse of the cell has a more complicated origin than we thought
By Viviane Callier and Knowable Magazine
Science
6.27.2022 11:00 AM
Letting your cat go outside could spread “life-threatening” parasites — new research
By Amy Wilson, Scott Wilson and The Conversation
Related Tags
Share: