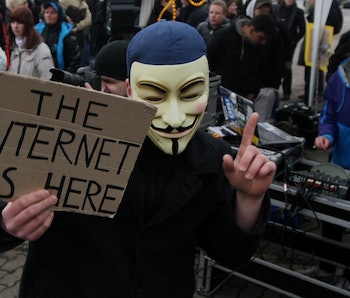 Just as bipartisan support is building for a roll-back of mandatory drug sentences, one legislator wants to put the rubber stamp on convicted computer hackers.

San Francisco-based activist group the Electronic Frontier Foundation (slogan: “defending your rights in the digital world”) is calling a proposed amendment to the Computer Information Sharing Act of 2015 a way to make a bad law worse.

Here’s how EFF member Nadia Kayyal breaks it down:

“The new provision is redundant, and worsens the CFAA’s already draconian penalties. It also inappropriately strips judges of their ability to determine what kind of sentence is appropriate for the specific individual before them. It prohibits judges from imposing probation instead of jail; and forces them to impose the “aggravated damage” sentence (which has a maximum of 20 years) consecutively to any other sentence imposed, prohibiting the judge from reducing the other sentence to make up for the consecutive sentence it must impose for the “aggravated damage.”

Proposed by Democratic Senator Sheldon Whitehouse, the amendment would make it so courts “shall not place any person convicted of a violation of this section on probation” and calls for any person who causes damage to a “critical infrastructure computer” be — in addition to felony punishment — “fined under this title, imprisoned for not more than 20 years, or both.”

Inverse has contacted Whitehouse’s office about the amendment and will update this story when we hear back.

Besides the EFF’s concerns that the amendment’s language around mental states and intent is so vague as to be unconstitutional (you must act “knowing such conduct to be wrongful”) when compared to the trend of computer crimes in the United States, the amendment seems an overreaction.

More like this
Innovation
Oct. 5, 2022
Worm spit could be a secret cure to the world's plastic problem
By Molly Glick
Innovation
Oct. 2, 2022
Want a better relationship with your dog? Neuroscientists say these 7 factors are key
By Tara Yarlagadda
Innovation
Sep. 29, 2022
Scientists have created a mechanical womb that can grow life in the lab
By Miriam Fauzia
Related Tags
Share: