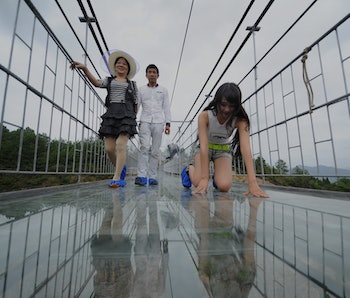 At the average human walking speed of about 4.5 feet a second, it will take you just over three-and-a-half minutes to cross the completed 430-meter (1410.76 feet) Haohan Qiao bridge. You might walk a little slower than usual, though, considering the only thing between you and a 180-meter drop is 24 millimeters of glass.

Also called the Brave Men’s Bridge, the structure spans a canyon in Shiniuzhai National Geological Park in the southern province of Hunan, China. Though it’s the first glass bridge in China, it’s not the original in the world — see precursors like London’s Tower Bridge. But Brave Men’s Bridge has kicked a bit of a glass-structure craze in China; the longest and highest glass bridge in the world is planned to open in October in Zhangjiajie Gradn Canyon, also in Hunan.

Glass breaks, as it is wont to do, and floors made of the stuff are no exception: A beer bottle cracked a panel in the Tower Bridge in London and in Chicago, the Willis Tower observation deck had to be replaced, too. (The only things hurt in either case were emotions and property). Haohan Qiao is no suspension slouch, either: It’s supposed to be able to withstand jumping tourists, say its builders.