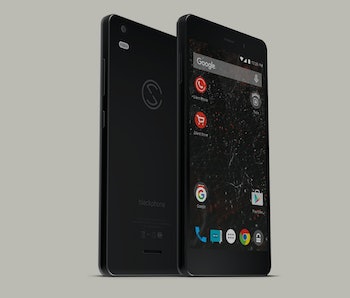 Smartphone ubiquity and Apple’s iPhone dominance mean smaller companies need unique innovations to stand out. Switzerland-based Silent Circle’s specialty is security. The company’s newest device, Blackphone 2, runs for $799, but promises to encrypt all of your data, keeping it entirely private to you.

Blackphone 2 (the slogan of which is “privacy without compromise”) is an Android phone that runs on a bespoke operating system called Silent OS. Chief among the phone’s privacy features is a profile system called Spaces, in which the user can have distinct “virtual phones” within one device that she can flip between. That is, her personal phone exists safely and separately from her work phone, though both are accessed in the same Blackphone 2.

Silent Circle’s Blackphone 2 encrypts phone data using a homegrown “cryptographic key-agreement protocol” called the ZRTP (Zimmermann Real-time Transport Protocol). The ZRTP works by encrypting any communication you have from your phone to the other party’s — whether that’s sending a text, photo, or making a call. That means anything you share is just between you and with whomever you choose to share it. As Silent Circle demonstrates, we share our data with third parties much more frequently than we realize.

Nobody in that video looks happy to carefully read their user agreements. It may not be possible to achieve true personalization and security with such mass-produced mobile devices. Blackphone 2, thus, appears to be another step toward boutique smartphones.

The Constitution is already being invoked to protect our passcodes. It’s time that a device reflects the security we need going forward.