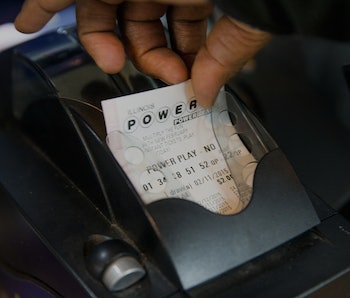 A new app hopes to act as Seamless for the lottery.

Called Jackpocket, the app sends you pictures of your tickets, entreating you to “[t]hink of Jackpocket like your really good friend who is always available to take your orders for lottery tickets and always makes sure to buy the exact ticket you requested in time for the drawing!”

The app maintains that it is perfectly safe and legal — in fact, it’s even safer than engaging with the lottery the normal way, as “[y]our physical tickets are securely stored in a locked vault that only our core team members have access to. For your records, you will be given a picture of your ticket after it has been purchased.”

In a conversation with Inverse, Jackpocket CEO Peter Sullivan said, “We validate IDs in real time — we check to make sure there’s an actual record of the person’s name and DOB, you exist, and you’re in New York at the time of the purchase.”

If you win? If it’s $600 or less, your Jackpocket account will be credited. If it’s more, “we will arrange to have the ticket delivered to you in a secure fashion so that you may claim your prize from the state lottery,” reads a statement on the app’s website.

Sullivan told the New York Post that the app is aimed at people their 20s and 30s. And also, women “who are intimidated to walk into a bodega.” Sullivan elaborated to Inverse, “We want to hit a demographic that can afford 5 or 10 dollars on lottery tickets, rather than focusing on people who maybe shouldn’t be.”

Thus far, it is only available to play in the state of New York, although plans to expand to California, New Jersey, and beyond are in the works. “We’re really just trying to help the states,” said Sullivan. “After you order a ticket, we show you that 30 percent of the fund went to the New York education.”

John Oliver would probably disagree with its safety, but at any rate, the lottery game is about to change.