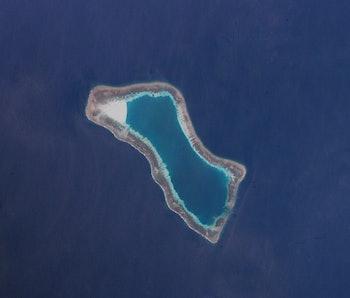 Marco Rubio raised fears about China’s “artificial islands” blocking ocean traffic in the South China Sea during the recent GOP debate, but scientists think shipping lanes are the least of our concerns. A new article in the journal Science points out that the man-made islands are already taking a huge toll on the environment.

China’s already built its faux islands in the middle of the South China Sea using the Spratly Islands as building blocks. Spratly Islands is kind of a convenient misnomer for the Chinese because they aren’t really islands at all; they’re ring-shaped coral reefs, or atolls. They are, for both fish and Chinese island builders, perfectly formed. They offer smaller fish protection and larger fish potential hatcheries. They offer the Chinese convenient places to pour sand in order to make artificial land.

High-resolution satellite photos from the Center for Strategic and International Studies reveal just how quickly the reefs have been transformed into islands. In less than three years, 13 square kilometers of land have appeared in the middle of a sea.

As one might expect, dumping tons of earth on top of already-delicate corals isn’t exactly going to help them survive. As the article describes, many of the reefs have already been destroyed. That’s bad news for fishermen and, to be frank, for the Chinese, who consume these fish stocks.

Nobody’s really sure who actually owns the Spratlys. All of China’s neighbors — the Philippines, Vietnam, Cambodia, Brunei, Taiwan, and Malaysia — have been locked in a debate over territorial claims for years. But China is bigger and intent on complicating the issue by laying claim to new land. Do legal claims mean anything in the face of sheer island-conjuring brute force? Probably not. And the fish don’t give a damn either way.