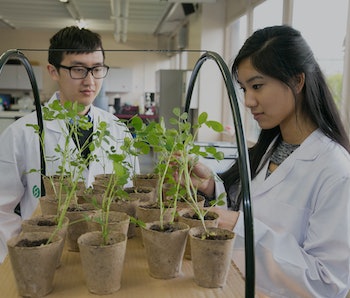 While you won’t find too many PB&Js in the modern American schoolyard — many schools have non-proliferation policies — you’ll find plenty of Epipens. With between two and 10 percent of the population affected, peanut allergies are on the verge of becoming an epidemic. That means roughly three million Americans live in fear of a legume, clutching adrenaline-filled needles just in case they get taken down by a Three Musketeers. It’s a solvable problem, but it’s unclear whether or not the solution will be palatable to consumers.

In theory, the most cost- and time-effective solution to the peanut allergy problem is an allergy-free peanut. Scientists have tried making one before, using enzymes to roast away the allergic bits. They’ve also attempted to breed out the genes that encode allergens, the parts of the peanut that send the immune system into overdrive. But it’s an all or nothing deal and breeding to the point of nothing poses a mathematical conundrum. Now, a new gene-editing technology called CRISPR — essentially a tiny pair of DNA scissors with a great sense of direction — is precise enough to make the hypoallergenic peanut a reality.

Chloe Gui of Aranex Biotech is using CRISPR to do exactly that. Her strategy, as she described it to Inverse, is simple: Take a peanut plant, identify the genes that encode the major allergens, send CRISPR in to cut them out, then breed a new crop devoid of allergens. Then take over the market.

Older genome editing techniques were never exact enough to do this right. Sure, they might have succeeded in cutting out a gene, but they might have cut out a handful of its neighbors as well, introducing unwanted mutations. CRISPR doesn’t do that. The technology isn’t unique, but Gui does represent the first wave of genetic farmers. Gui and her colleague Terry Huang simply saw an opportunity with peanuts when the CRISPR technology arrived.

But there’s a catch. Of course there’s a catch. In the six months Aranex has been in existence, the science has gone smoothly and Gui has learned that saying the letters “GMO” to investors can be a fraught business.

Whether or not a crop is labeled as “GMO” depends on the technique used to edit its genome. The system is frustratingly arbitrary, said Gui, and it doesn’t help that the rules differ between countries. If CRISPR enters an organism by hitching a ride with the bacteria Agrobacterium tumefaciens — a common lab technique — the resulting plant will be considered a GMO by the USDA. But using a “gene gun,” which essentially shoots bits of DNA into a plant, doesn’t result in a label. To describe the policy as arbitrary is to give it the benefit of the doubt.

CRISPR hasn’t been around long enough for the authorities to decide its fate. Because Gui’s not using it to introduce new genes into peanuts — she’s just knocking out existing ones — she’s trying to stay optimistic. But with the confused state of GMO labeling, she says, it’s hard to say whether her work will continue to find funding.

While the technology to engineer her allergy-free peanut is already within her grasp, so much of her project’s future, as is always the case in science, remains out of her control. It’s frustrating to think that this potentially schoolyard-revolutionizing technology might never make it out of the lab. “It’ll be interesting to see how CRISPR plays out,” Gui shrugged. “But no one really knows yet.”