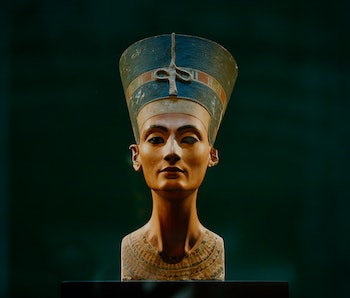 Ancient Egypt’s mysterious Nefertiti is a historical fascination of the you-can’t-make-this-shit-up variety: famously beautiful and powerful, casual creator of a new religion, vanished from the face of the Earth in a tantalizingly mysterious way that has provoked theories ranging from death by plague to disguising herself as a man. She’s been one of history’s most enduring enigmas, and on September 28, archeologist Nicholas Reeves who hypothesized about hidden doorways in King Tut’s tomb holding the key to the legendary queen’s elusive resting place, might find some answers.

Originally discovered in 1922, King Tut’s 3,300 year-old tomb is famous for its mysterious curse, its plethora of artifacts, its ties to a fallen ruler’s tragically short life, and the fact that 3,300 years is a long-ass time ago and as such, it’s a murky historical period the world is hungry to know more about.

Now, it might shake up history yet again, because the theory is that it isn’t, in fact, King Tut’s tomb at all — according to Reeves, the tomb’s design is more fitting for a queen, and Tut was a guest in Nefertiti’s tomb. Maybe King Tut’s curse was Nefertiti being pissed that everyone thought her tomb was her scrawny stepson/ nephew/possible son’s (those Ancient Egyptian families make the Lannisters look puritanical).

Yale Egyptologist Josh Darnell expressed his skepticism to The Guardian, citing Howard Carter — the archeologist behind the King Tut discovery — as meticulously thorough.

“I would be very surprised if Carter missed an additional chamber, but again, you always have to question what you think you know, and it’s a very intriguing possibility,” he said.