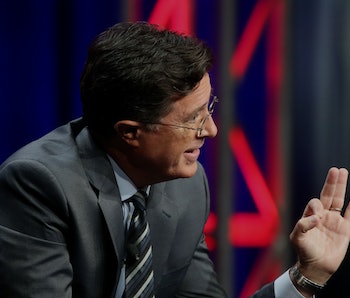 Fans of Stephen Colbert were cautiously optimistic that he would bring a different energy to late night. Colbert’s first week was tentative, but by the end of it, A.V. Club writer Erik Adams declared, “unlike its competition, The Late Show with Stephen Colbert has a host that matters.” And indeed, when Ted Cruz appeared on Monday’s Late Show, it was a beautiful sight. Stephen Colbert the character might be gone, but Colbert the real guy destroyed Cruz with his quick wit and firm grasp of American history.

When Colbert announced that Donald Trump would be his guest, audiences were giddily expectant. After softball interviews from Colbert’s late-night peers, maybe now Trump would finally face a worthy adversary. At the very least, it promised to be an explosive showdown.

But after an oddly subdued beginning, in which Trump spoke in tones more fitting of a grandmother in church than a blowhard Austin Powers villain from a discarded script draft, their interview gained traction. But anyone expecting a straightforward decimation in the same manner as Cruz was treated to something more complicated. Beneath his probing, Colbert was far more respectful towards Trump than anyone who watched this segment the previous week would’ve forecast.

Either Colbert is losing his edge, or Trump’s offhand comment that he’d seen the Cruz interview, coupled with his subdued attitude, demonstrated a heretofore undiscovered self-awareness that Colbert couldn’t help but respect. As a late-night personality, Colbert is proving hard to pin down, displaying typical late-night celebrity circle-jerk one moment; lighting-fast intelligence the next. The late night talk show circuit is a predictable cycle of opening monologues, cute routines with starlets, and largely toothless jokes — but after just two weeks, Colbert is proving to be the most unpredictable thing to happen on late night TV in a long time.