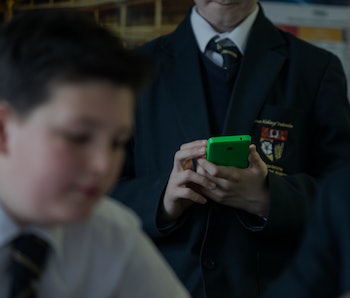 Schools that ban mobile phones see a boost in student’s grades, a large-scale U.K. study has found. And European schools are following suit.

The research published by the London School of Economics examined 91 schools in Birmingham, London, Leicester, and Manchester, and found that a no-phone zone generated improvements equivalent to students getting five good passes on General Certificates of Secondary Education. That bump — roughly 6 percent across the board — was greater even than schools that allowed students to keep their phones so long as they were switched off. Digging deeper, the effect on underachieving kids was even more significant: a 14 percent increase in test scores. Access to Candy Crush and Snapchat could mean the difference between a four-year university scholarship and taking out loans for community college.

Many schools are making phones verboten. A public school north of the Danish city of Silkeborg just announced a ban, and England’s Department for Education discipline tsar, Tom Bennett, has announced an inquiry into banning devices entirely.

While the Brits are cracking down, Americans are loosening up. In March, NYC Mayor Bill de Blasio lifted a ban on cell phones in schools, opting instead to let each institution set its own rules. No word yet on whether those schools allowing devices will teach proper care and presentation of the Union Jack.

More like this
Science
Jan. 28, 2023
ChatGPT could help students cheat — but it could also revolutionize education
By The Conversation and Sam Illingworth
Culture
Jan. 22, 2023
Shopping editors are calling these hidden gems on Amazon their most amazing finds of the year
By Cassandra Seale and BDG Commerce
Innovation
Jan. 19, 2023
A robot choreographer reveals why M3GAN — and all robots — should dance
By Molly Glick
LEARN SOMETHING NEW EVERY DAY.
Share: