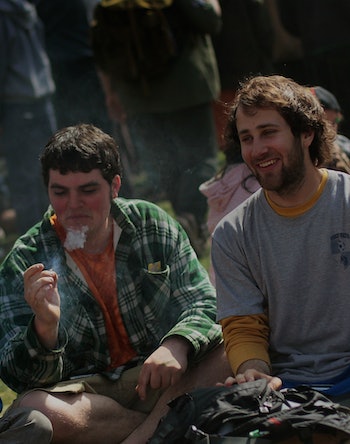 Despite sweeping legalization, American teens are smoking less pot than they did 15 years ago. The surprising finding comes from a Johns Hopkins-led study of high school students, published today in the journal Drug and Alcohol Dependence.

Opponents of marijuana legalization argue that normalizing marijuana use will cause the number of pot smokers to skyrocket.

“People have been very quick to say that marijuana use is going up and up and up in this country, particularly now that marijuana has become more normalized,” said study leader Renee M. Johnson, in a press statement.

According to the study, which looked at data on over 115,000 teenagers, that’s simply not the case.

Using data from the National Youth Risk Behavior Survey, the researchers found that the rate of marijuana use among high schoolers dropped from 47 to 37 percent between 1999 and 2009. While that number increased to 41 percent in 2013, it’s not a very substantial jump, especially in light of new laws making marijuana easier to get.

Since 1999, 34 states have decriminalized medical marijuana use, and possession of small amounts is legal in 20 states. It’s legal for recreational use in Alaska, Colorado, Oregon, and Washington.

It’s not the only surprising finding the researchers made. The gap between pot-smoking guys and girls is closing. In 1999, 51 percent of high school boys and 43 percent of girls had tried marijuana, in 2009 the numbers were much closer together, at 42 percent and 39 percent.

Clearly, the country’s misconceptions about marijuana use are not backed up by the available information. This much was evident in the recent GOP Debate, in which Republican presidential candidates very unscientifically butted heads over the issues surrounding marijuana. There’s a wealth of scientific data to support legalization. The question is, will they ever pay attention to it?