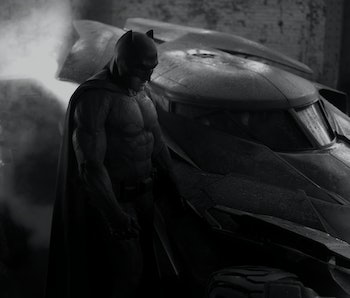 The freelance writer who co-created Batman (and invented a huge chunk of the character’s mythology) in 1939 will finally receive the recognition he deserves beginning today.

The statement from DC to The Hollywood Reporter:

DC Entertainment and the family of Bill Finger are pleased to announce that they have reached an agreement that recognizes Mr. Finger’s significant contributions to the Batman family of characters. “Bill Finger was instrumental in developing many of the key creative elements that enrich the Batman universe, and we look forward to building on our acknowledgement of his significant role in DC Comics’ history,” stated Diane Nelson, President of DC Entertainment. “As part of our acknowledgement of those contributions,” Nelson continued, “we are pleased to confirm today that Bill Finger will be receiving credit in the Warner Bros. television series Gotham beginning later this season, and in the forthcoming motion picture Batman v Superman: Dawn of Justice.”

Bob Kane has long hogged the credit for creating Batman, one of pop culture’s most enduring characters, even though he really didn’t contribute much on the creative end. Kane said himself in his 1989 autobiography Batman & Me: “I must admit that Bill never received the fame and recognition he deserved.”

Gotham premieres Sept. 21 on Fox, and Batman v. Superman: Dawn of Justice will be released Mar. 23.

More like this
Culture
Jan. 23, 2023
5 years ago, DC released the best Batman movie you haven't seen
By Laura Kelly
Entertainment
Jan. 27, 2023
Doom Patrol and Titans' cancellations mark the end of DC's best era of TV
By Eric Francisco
Entertainment
Jan. 26, 2023
Shazam! Fury of the Gods trailer pits the family against Helen Mirren and her dragon
By Mónica Marie Zorrilla
LEARN SOMETHING NEW EVERY DAY.
Share: