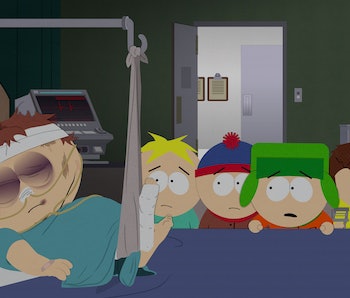 South Park returned to Comedy Central last night for its 19th season. In “Stunning and Brave,” the boys tackle Caitlyn Jenner and Deflategate. The topics probably could’ve been predicted months ago, so why bother with South Park anymore when it sometimes feels like it’s become a Mad Libs parody of itself?

Topics from the previous few seasons include Game of Thrones, concert holograms, and Randy Marsh as Lorde. The flavor-of-the-week vibe with which the show has run for a number of years now may not offer the same kind of results as the recurring or continuous storylines from previous seasons — like the “Imaginationland” trilogy or Christmas episodes with Mr. Hanky — but they have their own sort of off-the-cuff charm. When a lot of episodes are literally extended poop jokes (like Season 11’s “More Crap”), it doesn’t hurt to sneak in some cultural relevance.

South Park still matters, but “pointing out the obvious” is not enough. In “Stunning and Brave,” Cartman beats the Deflategate horse dead, calling Tom Brady his hero because “he breaks the rules and gets away with it.” The episode finds real laughs when it turns political correctness into a frat — PC. It’s funny to see a bro beat the shit out of a fourth-grader for microaggressing Italian-Americans by saying, “capiche.”

Overall, though, the message is pretty flawed. Political correctness isn’t evil, but the South Park creators try to convey the message that it can’t be used only as an intimidation factor. In the episode, nobody is willing to say Caitlyn Jenner is anything but a “stunning and beautiful” hero. The episode’s lesson is, thus, that Jenner can be both a hero and a not-great human being on a personal level. That is, her accomplishments don’t provide her immunity, even if they are tremendous feats.

The show is not likely to return to the days of arbitrary plots — It’s firmly intertwined within pop culture at large. It also shouldn’t be seen as a particularly subversive force against the broader consensus. Still, it is not afraid to push the boundaries of what is acceptable, which keeps it relevant. South Park does not promote a hive mind mentality; chances are, creators Trey Parker and Matt Stone want you to disagree with much of the episode. They likely support Caitlyn Jenner’s public transition, but also want to say what they believe many are thinking. The show doesn’t have to present the correct or popular opinion to be provocative.

South Park still matters because it will push the envelope for enough to start a conversation, and it’s not afraid to be the bad guy. One of the PC bros says it himself at the episode’s end: “I would have never thought to use offensive imagery and outrageous stereotypes to provoke someone to open their eyes.”