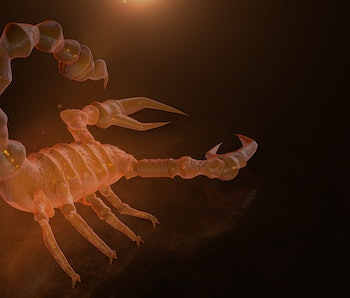 Modern-day scorpions impress and terrify with their quick reflexes and venomous sting. But these monsters have an ancient lineage — one that stretches back to the earliest years of animal life on Earth.

In fact, scorpions may have been among the first animals ever to adapt to life on land. That’s one of the takeaways from a new fossil discovery detailed in a study published Thursday in the journal Scientific Reports. The fossil appears to belong to an entirely new species of prehistoric scorpion, Parioscorpio venator.

The fossil is from the early Silurian period, dating back to approximately 437.5 to 436.5 million years ago. It’s the earliest scorpion fossil ever found — and because scorpions were likely the first animals to become land dwellers, the new discovery provides unprecedented insight into how the earliest land animals evolved.

"Prior to this all of animal life is in the ocean."

Discovering the earliest scorpion ever — and earliest arachnid — is undoubtedly a very cool accomplishment, but for lead author Andrew Wendruff, a paleontologist at Otterbein University, that’s not even the most exciting part.

What’s really striking is that the new findings is the earliest evidence of an organism that could breathe air, Wendruff tells Inverse.

“Prior to this all of animal life is in the ocean,” Wendruff says. “This is the beginning point of animals leaving the seas to utilize land!”

The fossil find was buried in a layer of Waukesha Biota in Wisconsin. The researchers dug up two well-preserved specimens. Claiming the throne as oldest scorpion, the new species beats out another early Earth-dweller and land scorpion, Dolichophonus loudonensis, fossils of which were discovered in Scotland, according to a 2013 study published in the journal BioOne.

The new scorpion, P. venator, has traits associated with other primitive animals, like compound eyes, with tiny photoreceptors similar to those of a fly, as well as some modern characteristics — including the tail stinger we know and fear today. The samples have neither lungs nor gills, suggesting the creatures may straddle a fine line between life on land and sea, similar to horseshoe crabs.

Scorpions’ place in both prehistoric and modern times are part of the reason studying them is so fascinating, Wendruff says.

“Scorpions are interesting because they are among the earliest terrestrial arthropod groups found in the fossil record that are still around today,” he says.

Scorpions are among the first animals to have become fully terrestrialised. Their early fossil record is limited, and fundamental questions, including how and when they adapted to life on land, have been difficult to answer. Here we describe a new exceptionally preserved fossil scorpion from the Waukesha Biota (early Silurian, ca. 437.5–436.5Ma) of Wisconsin, USA. This is the earliest scorpion yet reported, and it shows a combination of primitive marine chelicerate and derived arachnid characteristics. Elements of the circulatory, respiratory, and digestive systems are preserved, and they are essentially indistinguishable from those of present-day scorpions but share similarities with marine relatives. At this early point in arachnid evolution, physiological changes concomitant with the marine-to-terrestrial transition must have occurred but, remarkably, structural change in the circulatory or respiratory systems appear negligible. Whereas there is no unambiguous evidence that this early scorpion was terrestrial, this evidence suggests that ancestral scorpions were likely capable of forays onto land, a behavior similar to that of extant horseshoe crabs.